After more than a decade from the first tribal disenrollments at Picayune Rancheria of Chukchansi Indians (PRCI), word is coming out that more disenrollments are on the horizon.

Back in 2008, I tried to put into graphics what the original disenrollments looked like. Click on the picture to enlarge. 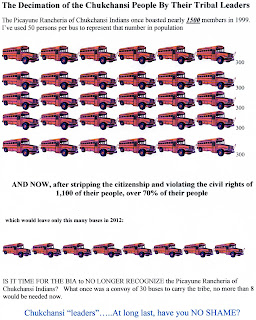 The Incredibly shrinking PICAYUNE tribe seems to be more interested in self-decimation, rather than self-determination, of the Chukchansi people.  Are more mass disenrollments coming?  We put a FACE to their earliest disenrollments here

There is a document sent out for 30 day commentary to general membership by PRCI tribal council on December 17, 2018, with very probable implementation after tribal council vote, by January 16, 2019. This happens more easily when you ELIMINATE votes via disenrollment.

Anyone surprised that the next meeting of the tribe falls after the comment period?  It's almost like they planned it that way.

Word is that they've replaced their attorneys, law firm Fredericks, Peebles and Morgan. Is that a good thing?

These tribal members better have secured protection. These disenrollment issues are not being taken lightly. Taking the bread and butter from these tables has a price meanwhile in San Pasqual tribe we have more frauds.. and thier decendents really think they are native! lol ....

I'm a Tribal Member of Picayine and things are really starting to heat up. People are afraid to speak out due to retaliation. This is A Greed Driven few that will cost us everything culturally spiritually. CREATOR HELP US.

Reading the above article make me sick! Picayune should be worried about there Casino? Wasn’t this the Tribe that was forced to shut down due to violence?

Violence sounds good.
Especially in Pala where they have a Chairman that loves to hurt people that don't back him up.
Hopefully he will die soon and maybe Nieto will retire and move to Mexico or better yet maybe she will also die.

Prayers against evil can be answered.
Keep Praying for the good of your Tribes
to rid them of the evil leaders and corruption
and don't afraid and give up because it will come to pass sooner or later.