Since 2007, we have stood with Chukchansi disenrolled. Proud to work with and help my hero, CATHY CORY. 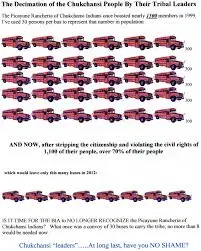 Since the 2003 opening of the Chukchansi Gold Resort and Casino the Chukchansi Tribe has been one of the leading tribes known for disenrolling its own members. Disenrollment is the process by which a tribe strips members of their tribal affiliation thus denying those members the benefits associated with federal tribal affiliation such as education benefits, land and property rights on reservations, tax benefits, medical benefits, and payments to the tribe from tribal sources of money including money from casinos owned by the tribe as well as child care and elder care.[5][6]

Since 2003 hundreds of tribal members have been disenrolled allowing the remaining tribal members to receive larger portions of the income from the casino.

The tribe has disenrolled people with documented ancestry, land rights granted by the federal government and some of the last native speakers of the Chukchansi language. By 2013 the tribal membership had gone from an estimated 1800 members to an estimated 900 members. In a now thrown-out court case in 2012, the Ramirezes family argued that only the members of their family were legitimate Chukchansi tribe members.[5][7] In February 2012 leaders who opposed the policies of disenrollment were elected to the tribal council by a majority vote. However, the incumbent council members invalidated the elections and refused to step down to the newly elected leaders. This resulted in supporters of the newly elected leaders staging protest where they occupied the "City Hall" building. The supporters of the incumbents then showed up and began throwing pepper-spray and burning logs into the building the protesters were occupying. Sheriffs deputies from Fresno and Madera Counties as well as the California Highway Patrol were called to break up the resulting riots.[5][8]

In February 2014 the Bureau of Indian Affairs stepped in and reappointed the 2010 Tribal Council in an attempt to temporarily resolve the dispute until a new Tribal Council was voted on. They decided to reappoint the 2010 leadership as that was the last year when the BIA could determine that there was an uncontested Tribal Council election.[9]

Posted by OPechanga at 3:46 PM