We are getting word that the recent change to disenrollment policy at the Elem Indian Colony, may be just smoke and mirrors to quash the lawsuit against the leaders of the Elem Colony, who had been accused of violations of civil and human rights.

Sources say that the tribe continues to violate tribal citizen's right to vote and services are refused.

Additionally, 18 year old adults of the "disenfranchised" are not allowed to enroll.  DNA tests are required for the children of  the former disenrolled male citizens only.

Shamefully, word reaching us that one female citizen of EIC, tried to enroll her 19 yr.old with autism.  The Tribal government said he needed a high school diploma.

Seems like the goalposts are a moving target and abusing special needs tribal citizens doesn't matter.

Why is there subterfuge when it's a simple matter to restore all rights of tribal citizens?  Recently, on March 18 tribal elder, U.S. Army Vietnam Veteran Cecil Brown passed away.  He was among the disenrolled.  Since his death, his widow, a prestigious elder and a main cook for the ceremonial Roundhouse, has been instructed by the tribal government, to vacate her home that her husband built.
REALLY Elem leaders? The tribe doesn't own that home!

As of last week, the tribe has offered to remove the disenfranchisement status of only FIVE members, reinstating their per capita and voting rights on the contingency that Robert Geary, (Roundhouse leader and the last speaker of the tribe's language who resides on the reservation and Rose Steele move OFF the reservation.

This is a PLOY to create friction among the disenfranchised members. Divide and CONQUER?

WHO is the guiding force of these despicable acts of the Elem Indian Colony leaders?
WHO says to them "what you are doing is right and just"?
WHO can be proud of these actions?  It's NOT the Indian way.  Bring ALL the people HOME, where they belong. 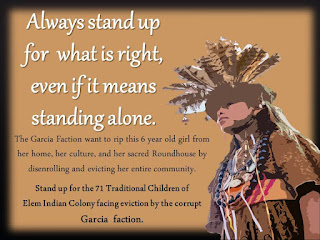 Posted by OPechanga at 1:17 AM

I have dear friends affected by this who are in dire need of services now denied them. It is heartbreaking!