BIA Claims there's NO there there in NOOKSACK TRIBE's Kelly Faction (Clown Car Crew) lawsuit.  From the filing:

This lawsuit was filed under false pretenses. Although the plaintiff is identified in the caption as “The Nooksack Indian Tribe,” the Nooksack Indian Tribe (Tribe) is not truly before the Court. After the former Nooksack Tribal Council chose to unilaterally “suspend” the 2016 tribal elections for expiring Council seats, commencing on March 24, 2016, and continuing to the present day, the Tribe has lacked a tribal government that is recognized as such by the United States.

Instead, since March 24, 2016, the Tribe has been run by a group of individuals, comprised mostly of unelected “councilmembers,” who have no legitimate claim to be the governing body of the Tribe nor any authority to approve the filing of a complaint in a United States District Court against the Secretary of the Interior (Secretary) in the name of the Tribe. This unelected, unrecognized, and illegitimate group, hereafter referred to as “the Kelly Faction,” and not the Tribe, stands before this Court as plaintiff and invokes its equitable power. 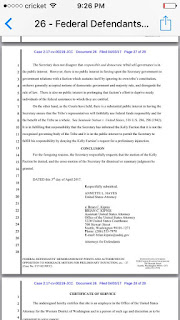 Posted by OPechanga at 9:19 AM

This one will get dismissed. The federal government should not recognize rogue tribal governments, and should suspend all benefits and programs until a Secretarial election is conducted which includes the targeted disenrollees. That is where this action will lead, and this is one time that disenrolling opponents will not enable the tribal leaders to violate tribal law.