I've invited a friend, American Indian Activist Paul Johnson, to write a piece on the civil rights that we constantly talk about, but to many, they only have a vague idea what it means.   I'm going to break down his piece into at least two posts, so I'm inviting everyone to share it and anticipate the next post from Paul.  I'll add some thoughts on how these violations relate to my family's issues at Pechanga.   repost from July 2015 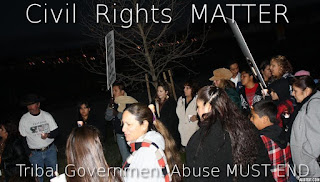 The recent resolution from the NNABA supporting Equal Protection and Due Process for those who have been divested of the Right of Tribal Citizenship
is shining a light on the civil and human rights violations that accompany many of the disenrollment actions happening throughout Indian Country.  So what are these civil rights to which we refer, and how are they being violated?

When we speak of the right to due process we are citing the Fifth and Fourteenth Amendments of the U.S. Constitution. Due process provides protections to those facing a proposed action, applies in civil and criminal proceedings, and has specific requirements.
Here are the requirements in a nutshell:
1.     Unbiased tribunal
2.     Notice of proposed action and the grounds on which it is based
3.     to present a reason why the action should not occur
4.     Right to call witnesses on your behalf
5.     Right to know what evidence is brought against you

Here is how the Fourteenth Amendment says it:
“...nor shall any State deprive any person of life, liberty, or property, without due process of law; nor deny to any person within its jurisdiction the equal protection of the law.”
Most disenrollees receive no prior notification that their tribal citizenship is in jeopardy. Tribes refuse to conduct hearings, or provide the opportunity to present evidence or witnesses. The decision is usually made in private meetings of Enrollment Committees, based on dubious and spurious evidence and without an independent judicial review.

These are violations of the right to due process as guaranteed by the Indian Civil Rights Act of 1968, but the ICRA has no provision to enforce denial of due process. Was it an oversight of Congress to omit the power to enforce these rights for tribal citizens? The obvious answer is NO!  And we'll address that in a subsequent post.

Thank you Paul.   Stay tuned for PART TWO.
Posted by OPechanga at 8:00 AM

How about allowing writing instruments at disenrollment hearings? At our appeals hearings with the tribal council we were not even allowed to write anything down as they wouldn't let us bring pens or pencils into the hearings.

In the upcoming days the rest of the article will be posted here, and some of these questions will be answered, and more questions raised.

Tribes are violating the civil rights of their members and there is no question about that. It is a proven fact. The Courts say they can't do anything it about because Congress has not legislated any laws that pertain to the enforcement of civil rights protections for Indians. Also the courts say that they have no jurisdiction over Tribes because Tribes are sovereign nations. Also the courts say that Tribes have immunity from lawsuits and can't be prosecuted in civil actions.

Three strikes and disenrollees are out. No way to enforce civil right violations, no jurisdiction, and no way to sue. What kind of game are they playing here? American Indians are U.S. Citizens. Their civil rights are guaranteed, and the Fourteenth Amendment says that all persons will receive equal protection under the law regardless of race, color, creed, age, or gender.

So why are Tribes allowed to violate the rights of U.S. Citizens? It is time to open our eyes, and see beyond the violations of tribal law and custom and tradition that are embodied in disenrollment actions.

We can't get hung up on the details though. The number of civil rights violations that have occurred is so large that those who have perpetrated these crimes will never be brought to justice. What I think we need to do is to try to get the BIA, the Courts, and even Congress to recognize that they cannot violate the civil rights of U.S. Citizens even though the individuals involved are Indians.

Right now they all want to say that enforcing civil rights protections means abrogating Tribal decisions and interfering with self-determination. And there you have it; put it up on the scales of Justice. Tribal self-determination outweighs individual rights by a wide margin!

Why did that happen? Why make Indians U.S. Citizens, then create the ICRA to protect Indian Civil Rights, only to yank the rug right out from under them and say that the sovereignty of Tribes allows them to violate Civil Rights?

That is why I say these rulings must be challenged outside of the context of tribal membership disputes. If it is a membership dispute it is governed by the Santa Clara v. Martinez decision. The Court will dismiss because Tribes have the right to determine their own membership and can't be sued.

Don't go to that place anymore. It is a lose lose situation. It strengthens the powers of Tribal leaders over their members and weakens sovereignty as it creates non-members and removes them from the authority of tribal law. That's all wrong and has led to corruption of the worst kind.

The alternative I am suggesting is to appeal to the BIA for due process and equal protection under the law. The BIA is a Federal Agency. No matter what powers have been delegated to them over Indian Country, they cannot violate the civil rights of U.S. Citizens.

The BIA cannot provide hearings and independent judicial review. They will have to refer the action to Federal Court. But if they do that they are violating the civil rights of the appellants. It doesn't matter. They already violate civil rights by allowing Tribes to determine who is eligible for federal programs and services without providing due process or equal protection.

There is much discussion that still needs to take place so we can understand how to attack this unfair standard on eligibility that has been placed on Indians. We can't let the Courts get away with avoiding these clear and inarguable violations. This could lead to a new policy, a precedent, a recognition of civil rights, and ultimately change the way that the government to government relationship is conducted.

What you are saying is so true. That is also a plain fact of why other Indians are sharing their feelings on disenrollment. They can clearly see that the government to government blanket can be pulled anytime and it will effect ALL BANDS ACROSS THE STORY. The Bad Actors think their actions will be accepted, however they are clipping away at the boulder created by our ancestors to protect ALL Indians. This issue needs to be settled inside the band before the blanket is takin away across the board.

We agree that the Pechanga tribe has violated the rights of it members. There is no impartial public forum where both sides can present their arguments and evidence to support the position. Pechanga will say that the courts have decided that we do not belong when the truth is the courts have never heard the merits of our case. This is just one of the lies that Pechanga perpetrates to keep its seat of power. This has all been said before. the point is Pechanga and other tribes who disenroll in mass know that once your status is changed from tribal member to non-member you lose any credibility, influence, and ability to affect change within the tribe and the greater system. The greater systems being those of the federal government and inter tribal government relationships.

Now this is the type of conversation that I enjoy. Thank you Emilio Reyes for trying but you can't light a candle next to these guys. The solution to the epidemic is priority, not dismantling history and demonizing Christianity.

We can demand treatment as U.S. Citizens, fully entitled to civil rights of due process and equal protection. The repugnant interpretation that the ICRA has no provision for enforcement and therefore civil rights violations of Indians by Indians are not prosecutable must be challenged. It does matter if civil rights are violated, and an independent tribunal must adjudicate. The decision might not be enforceable due to sovereign immunity but a ruling that the actions were violations of the law and that the BIA can't cooperate with the violators would help immensely.

I think with such a ruling it would be possible to sue the violators for personal damages since they were acting outside the law.

I could only say thanks to all civil lawyers how protect our citizens. Their amount is getting lesser and lesser. We can find them by looking at the professional cvs of this professional cv writing service