Is it past time for the BIA and the Department of Interior to END recognition of the Picayune Rancheria?  Is THIS the tribe that was recognized?   After all the harm they have done to Native People, shouldn't their be a judgement AGAINST them?   Suspend their constitution and set an example to all for what happens when you violate the rights of your people.

The Picayune Rancheria of Chukchansi Indians, of Coarsegold near Fresno have drastically reduced their membership. Last year, they removed 200 people including their few remaining language speakers.

The BIA's director Dale Risling was quoted in 2007 saying there was nothing they could do "short of ceasing to recognize" the tribe because of the Martinez decision. Well, how many would recognize the tribe from what is was in 2005?

I have put together a very rudimentary graphic that explains what the destruction of the Chukchansi populace looks like if you put them into buses to move them. Once a proud convoy of 30 buses would have been used (at 50 people per bus) to transport the tribe.   Now, after the tribe has thrown so many UNDER the bus, less than eight full buses would be needed. 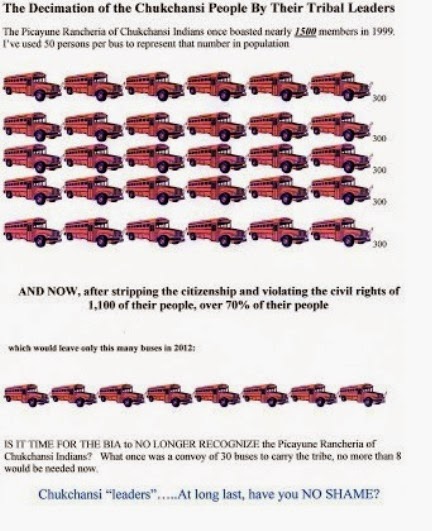 Posted by OPechanga at 8:45 AM

Yes, terminate their federal recognition. With the federal government being broke, one less "step child" tribe they have to provide for, the better.

In that case terminate them all the native race seems to be nothing but a burden on everybody especially on this country as a whole. To say any native tribe would be better is a lie. They are all the same. Greedy greedy greedy. And until greed is gone there will never be any good for any tribe.

You are so wrong about Indians. They are not all the same. They are hundreds of different nations with diverse languages, culture, art, and history. This blog tells the story of the worst of the Indians; the corrupt disciples of lawyers and exploiters of Indians. These individuals are truly greedy and evil, but blame the individuals who are responsible for the crime and corruption, not all Indians.

Most Indians have sincere hearts, a deep reverence for their ancestors, an unabiding love for the land from which they come, and an inherent desire to preserve the balance between the earth, the spirits, and the people. These good people must rise up against the greedy and evil disciples of commercial society and restore the honor and dignity of their tribes.

The good people have difficult obstacles in their path. The money has corrupted many of those who are in positions of power. These people in positions of power wish to keep the illicit money flowing. They work for the BIA, the local, state, and federal government, law enforcement, the legal system, and within the tribe itself.

The corrupt people only pretend to be following the law while they take bribes and enticements to show bias towards the wrongdoers. We have seen this over and over again. The greedy and evil tribal leaders make contributions to campaigns, fund lobbyists, contribute to retirement funds, perform favors, and use the tribe's money to insure their position of power.

You can be part of the problem or part of the solution. Indians need your support to overthrow their tyrants.

ok R & R are you willing to get the ball rolling and come up with a plan and get the people behind you? will you ask people to bring out the proof and get all the corrupt to step down from their council seats? I keep reading about how terrible things are but yet to hear anyone say..."follow me, I stand for justice"

I love hearing how somebody asks.. WHAT IS YOUR PLAN, or ARE YOU willing...yet never stating, I have some plans and my family will take the lead.....

I do know the solution is not to blame all Indians, terminate all tribes, and make believe that Indians can just assimilate into society and forget about their heritage, their lands, and the pain and suffering they have endured as objects of rancor and discrimination.

Indians need to act within their own tribes and work for justice. We need to get the BIA to protect the fiduciary trust. We need law enforcement to fight crime, even when it is Indian against Indian. We need the federal courts to recognize the rights of individual Indians when they are fighting their corrupt leaders. We need some teeth in the ICRA that will provide for enforcement when Indian's civil rights are violated on the reservation.

Tribal leaders right now use lobbyists to protect tribal sovereignty and promote tribal gaming so they can get rich and avoid prosecution. Indians don't realize their leaders are selling them out in this way. If tribes wrote laws to protect individual Indians, and had ethical oversight of their leaders, then progress could be made on these fronts.

We have seen a great deal of corruption associated with tribal gaming, and it is not just the Indians who are involved. The only way for the people in positions of power to prove that they are honest is for them to do their jobs. So far they have helped evil tribal leaders hurt their own people. Let's continue to get the story out and let the court of public opinion help us along. Most of these people are elected officials and representatives and they need the confidence of the voters. If we can compel them to do the right thing by threatening them with exposure of their involvement in a conspiracy to commit fraud then perhaps we will see some changes.

If there are people in positions of power reading this, then let it be known that your involvement with corrupt tribal leaders has left a trail. Investigations are ongoing. The way to avoid complicity is to work with the Indians who are fighting disenrollment and internal corruption.

Those with evidence of corruption should disclose it. The US Attorney's Office in San Diego is a good place to start. They have an ongoing investigation. Hard evidence will tell your story better than tears. Photos, videos, and documents with names, dates, places, and amounts constitute hard evidence. Gather this evidence together and support your allegations with facts.

The preponderance of the evidence will win out. If you haven't been told this before, I am telling you now. Chukchansi will open doors for all the victims of corrupt leaders. Right off the bat there is evidence of discrimination in law enforcement. There were two invasions of the casino, one led by Reggie Lewis, and one led by Tex McDonald. Law enforcement only acted on one of the incidents.

This shows that what I am saying about law enforcement turning a blind eye is true. The BIA let multiple factions elect tribal leaders, allowed these factions to disenroll their opposition, and sat on their hands while the situation escalated into violence. This is what I mean about failing to protect the fiduciary trust. It is a clear abnegation of their duty.

Now the NIGC is stepping in, the CA Attorney General is asking to keep the casino closed, the court has issued an injunction. If the people of Chukchansi have har evidence they should gather it and provide it to the court. They should elect new leaders and ask the BIA to monitor the election. They should request assistance from the BIA to modify their constitution to incorporate provisions to prevent something like this happening ever again.

I can't be more explicit than this.