UPDATE III: Sadly, the latest is the girls have NOT been found.

UPDATE II: There is a hoax email that's going around, so trying to get confirmation that's solid.
UPDATE: The word is in that the girls have been found in Orange County. Still waiting for verification, but thats what sources are reporting.

Julianne Buzzelli, a 16-year-old girl from Riverside County, Ca, is missing. She was sleeping over at her friend's house, when the two wandered off together Friday night. Neither Julianne Buzzelli nor 15-year-old Alexis Bailey have been heard from since. 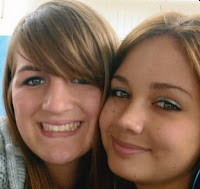 Julianne Buzzelli and Alexis Bailey
The Union-Tribune reported that Buzzelli's cell phone records "show a call was placed at 2:45 a.m. Saturday requesting a taxi at the Pechanga Casino, which is a number of miles from the Bailey house in the French Valley Winchester area of Temecula." The phone has since been shut off.

Both girls attend the Temecula Preparatory School. Alexis's father, Michael Bailey, said it was uncharacteristic of either girl to run off.

Anyone with information about the girls whereabouts is asked to call the Riverside County Sheriff's Department at (951) 776-1099.

UPDATE: Interesting that the Silk Nightclub was opened on Friday night after being closed for over a year due to alcohol related issues. If the call from the phone was made that late, could it be the girls were able to get into the nightclub? I'm sure there will be security video of the teenage girls if they were there...

Thank you O.P. for putting this information about the missing girls on your blog.

Let's hope this is just a case of the girl doing something crazy and now are scared to go home.

We DID find it surprising (no, not really) that the PRESS ENTERPRISE would leave that nugget of information out, that the phone was used to make a call from Pechanga. All the other news sites had that. Are they trying to protect the casino?

Pechanga is their, "Press-Enterprise" bread and butter. This just proves that with enough money even history can be rewritten.

To be fair, Pechanga has nothing to do with this, per se. It's just that the LAST bit of evidence was that the final call was made AT the Pechanga Casino. THAT IS NEWS, as the UNION TRIBUNE would report it.

I'm hoping Pechanga has video of the girl making the call for a taxi and is sharing that with authorities. I wonder if they were IN the casino and Silk?

I'm sure she wasn't in Silk, as she was only 16 years old. I don't think they would have ever let her in.

...i'm sure the sheriff's department is viewing the tapes, as i write this. if not, the girlies parents better start demanding the release of the videos b/f pechanga's finest destroys the tapes (evidence), and soon, especially if there is damaging evidence against pechanga's cash cow - the great and mighty casino...i might add, that for without the cash casino, the enrolled pechanga people will be forced to return to peon status. yup, better serve up a warrant on the casino, STAT!

Do the county sheriff's have the legal standing to serve a warrant on the sovereign criminal enterprise that is Pechanga?

They have to balance doing what is right, versus making film available of two underage girls in their nightclub on opening night. (IF that is what happened).

Since their record of doing what is right is rather suspect, I wouldn't count on it.

Are these girls in the same age group that Pechanga's registered sex offender is fond of? You know, the one the disenrollment committee took the word of?

Very sad and scary. I hope Pechanga goes through their tapes and turns over anything they find to the authorities. If they didn't get a taxi they could have possibly taken a ride from someone they met. The place of the last call is crucial to finding them and that news should not be omitted.

To answer the anonymous who asked:
"Do the county sheriff's have the legal standing to serve a warrant on the sovereign criminal enterprise that is Pechanga?"

There is a Federal building in downtown Riverside that houses offices for investigators of federal crimes. At least there was when I lived there. All the Sheriff has to do is make a phone call and any suspected federal crime on any Indian lands will be investigated. If the Sheriff can't get the video, the feds certainly can and share the info with the Sheriff. I never can remember but I think Ca. is a "Public Law" state as well. I don't see anyone denying access to video that might solve such a mystery, not even Pechanga, but the CIA destroying interrogation tapes means anything is possible when a government feels it needs to protect government figures or a government operation.
If it's just a false alarm from a couple of teenagers that ran of with boyfriends or something, that would be a great relief, but we know there are some very unkind predators in this world and early attention is the best approach.
Let's hope they are safe

Just for clarity, the phone call was not made from Pechanga. The call pinged a cell phone tower in the Pechanga area, which includes Redhawk, Vail Ranch, Temecula Valley Parkway, Albertsons, Stater Bros, Taco Bell, McDonalds, Del Taco, Stadium Pizza, Pizza Factory, all of the local parks, GOHS, the reservation, or a car passing through.
The casino checked their video immediately after law enforcement requested it. Everyone came together to help on this- firends and enemies alike.

THE GIRLS WERE FOUND- CLASSIFIED AS RUN AWAYS! PRAISE GOD. THANKS FOR YOUR PRAYERS.

On Tuesday, the five-member gaming commission agreed to accept initial applications from commercial developers while still allowing time for the tribe to resolve its issues. A formal vote on the proposal is expected next week. texas holdem poker chips