Matilda Smith, the eldest surviving great granddaughter of original Pechanga allottee, Paulina Hunter, has walked on at 91. She was my late father Felipe Cuevas' last surviving sibling.  Matilda attended school throughout the Great Depression & graduated from Roosevelt High School in 1947. She enlisted in the United States Air Force in 1950 where she trained for and became a cryptographer for Central Intelligence. While stationed in Murfreesboro, TN, she met and married the love if her life, Frank Smith on March 3, 1952 .

I wrote this tribute in September 2020

HAPPY Birthday to my aunt
Matilda Smith, who, at 91 is the eldest descendant of Paulina Hunter's daugher Mary Ann Miller. We wrote about the abuse of Pechanga elders, who were disenrolled from the Pechanga Band of Luiseno Indians.

Matilda was 75 years old when the Pechanga tribal council abandoned her, unlawfully taking this elder's per capita money, health care, voting rights and her rights as an allottee, and dishonoring our ancestors.

During my last visit with my aunt Matilda , then 87 years old, she recalled being on the reservation in the late 1930’s. “It was a long trip to get there, especially in those days”. “But that is where our roots were, my grandmother loved it there.”

Her grandmother was Mary Ann Miller, daughter of Paulina Hunter, an original allottee (#62) of the Temecula Reservation known as Pechanga.  Up to her disenrollment, she was attending meetings, travelling out from OKLA 'freaking" HOMA to support the tribe and family.   That's how much she believed in her tribal responsibilities.

She was also a MILITARY VETERAN, which meant very little to the tribe.
My great grandmother Mary Ann Hunter Miller, lived to be 88. 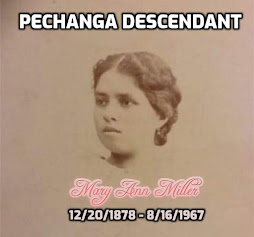