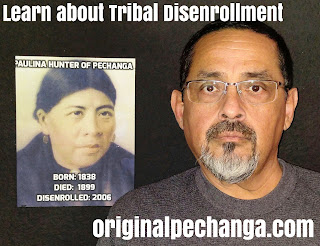 Original Pechanga Blog progressed from primarily one detailing the injustice of Mark Macarro and his then tribal councils crusade against my family, to one working to help those from all tribes who have been disenrolled unjustly.

#stopdisenrollment has become a phenomenon, yet still so much work to do exposing the corruption and abuse, while our elders walk on without justice.

I again, implore all to get into the fight, get vocal, get active and help end this INDIAN COUNTRY DISASTER

Posted by OPechanga at 2:01 PM