Here is an appreciation of a father, by his son, ME, that we wrote for last year's Veteran's Day.
We at Original Pechanga's Blog would like to thank all our veterans from each branch of service for their sacrifices. 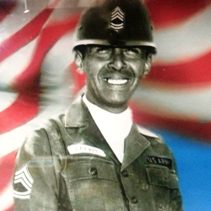 On this Veteran’s Day, I want to remember my father, Felipe Cuevas, born July 13, 1928. He was the son of Phillip and Olive Cuevas.  Olive was the daughter of Mary Ann Miller, who, in turn, was the daughter of Paulina Hunter of Pechanga.  Paulina was the matriarch of the Hunter Clan who was given her 20 acres of land on the Pechanga Reservation as the head of the Family by President McKinley. Her Pechanga Ancestry was proved by noted researcher Dr. John Johnson, who was hired by the Pechanga Enrollment Committee, using Pechanga's own records.

My father grew up in Los Angeles, attending Malabar Elementary, and a graduate of Roosevelt High School.  He the oldest of five children, all of whom served in our military, including his sister Mary Ann Poole and his eldest sister, Matilda Smith, who is the eldest now of the Hunter Family. He entered the U.S. Army in 1948 and served in many capacities, primarily as a drill instructor. He was stationed in Germany, where his wife Alice bore a son,serving as well in South Korea, Ft. Ord, CA (three times), Ft. Lewis, WA where I was born, and Ft. Benning, GA. At all of these posts he trained young men to serve our country. He served two tours in Vietnam, once an advisor with a South Vietnamese Army Battalion, both tours were near the end of his 23 year career.

He always taught us about our family roots at Pechanga, having helped to build the cabin on Hunter Lane in 1957 with his cousins and uncles. My first time on the reservation was when he served his first tour in Vietnam in 1966. My Aunt Tillie and Uncle Bars took my brother and me to spend time at the cabin. That was when you could still hunt on the rez, for rabbit and dove. He was proud to be Pechanga and he was happy that family members were able to bring us to the reservation while he was in Southeast Asia.  At that time, there were few homes on the reservation. It wasn't until after the casino came and many found out that they could avoid state income taxes did they move there ... or build there.

As it is Veteran’s Day, I’m proud to write about one of his achievements. This Pechanga warrior was awarded the Army Commendation Medal with “V” Device (valor).  His first tour was as an advisor to a South Vietnamese Unit, serving with two other Americans.  Since my scanner is down, I’ll re-type the citation here, but will have a copy linked as soon as I can, so there can be no "Rathergate" claims. Here's what the citation says:

For heroism in connection with military operations against a hostile force: Sergeant First Class Cuevas distinguished himself by heroic action on 3 July 1967 while serving as Light Weapons Infantry Advisor to the 1st Battalion, 48th Infantry Regiment, Army of the Republic of Vietnam.

On that date, the Viet Cong opened fire on the battalion headquarters compound with machinegun, small arms and 82mm mortar fire. Eight Vietnamese soldiers and dependents were seriously wounded during the initial phase of the attack and an aerial evacuation was requested. Sergeant Cuevas voluntarily proceeded to the helicopter landing area.

Sergeant Cuevas remained in the exposed area assisting in sorting the wounded and determining priority for evacuation. Only when all wounded personnel were safely aboard an aircraft and airborne did Sergeant Cuevas return to a safe position. As result of Sergeant Cuevas’s prompt and courageous efforts, the rapid and efficient evacuation of all wounded was accomplished. Sergeant First Class Cuevas’ heroic actions were in keeping with the highest traditions of the United States Army and reflect great credit upon himself and the military service.

In a letter home to my mother, my father described what went on and his final reference to the above action which, by the way was his FIRST DAY there was;  " This made points with the troops, So I'm not in bad shape with the ARVN's." (Army of the Republic of Viet Nam)

My father was also awarded the Bronze Star. You don’t “win” these by the way. But he was proud of his service, proud that he was able to make young men ready to defend themselves and our country.

After surviving two tours in Vietnam and countless hours in the field training our military men, he died of a sudden heart attack in April 1979.

Sadly, he was never able to enjoy the largesse that came with the successful opening of the Pechanga Resort and Casino, which brought much needed funds to the reservation and our people. Conversely, he also was never able to feel the sting of seeing his birthright ripped from his family, which now includes five grandchildren and 6 great-grandchildren by a "disenrollment" committee that included: Ruth Masiel, Ihrene Scearce, Frances Miranda and Bobbie LeMere. Pechanga proudly displayed his name as a Pechanga Veteran on their website, along with his brother and sisters, yet now, they also say, HE IS NOT PECHANGA. Pechanga has disrespected all their veterans by removing their veteran's page, because most of the veteran's were Hunters.

On July 13, 2006, on what would have been his 78th birthday, the Pechanga Tribal Council heard our family’s appeal of our unconstitutional disenrollment and later did not allow our appeal. Much of that story is written here on this blog.

My father always encouraged my brother and me to do our best, to do what is right and THAT is why we continue to fight for our rights and against the evil that has been done to our family. We may not be triumphant, but we will be successful in shining a light on the corruption in the tribe and forcing them to defend their disgraceful actions.

Dad, thank you for all that you gave to your family and to your country. I am proud to be your son. It is shameful that Pechanga doesn't reward your memory by following the rule of law and the will of the people. Even more scurrilous, the Pechanga Tribal Council has seen fit to remove it's page honoring tribal veterans.

TO ALL OUR VETERANS: THANK YOU FOR YOUR SERVICE.

Feel free to discuss YOUR family veterans in our comments.

Posted by OPechanga at 1:00 AM

Great post, your father was very courageous. He was what a Brave was supposed to be. He taught you well, to be honest and do what is right. It is so sad that the tribal leaders have forgotten the veterans. It is sad that they have forgotten their elders too. But mostly it is sad that they have turned against the very people who are descendants to those that were truly Native and truly dedicated to their families and culture. The youth today are told so many lies that they really do not know the history of their people, the real history. One day we will all glorify in the fact that we staid true to our families and our culture by standing up to the evil that spawns itself into our Reservations. Those that don't will have an eternity of pain and hate, and their children and their children's children will all suffer because of the evil of their ancestors. Thank you Rick for your courage and thank you to your family for their service to our country.

It is a very memorable history. Thank you for the good. Come to read it.

Great Thanks and Gratitude to your Father for his proud dedicated service to protect the freedoms of the U.S. I surmise that those tribal officials who engage in hateful disenrollments of their own People are not Veterans. If I am wrong, let me know.