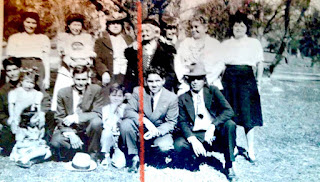 
Our Families are the historical tribe of Wilton Rancheria. Our families; we are the Blues, Brown and Taylor's. Our families sat on the Interim council before and after recognition. The Wilton Rancheria tribe agreed to a 1999 mediation agreement to not only recognize the 1959 distributees but include all base rolls which included us. Our families were instrumental in Wilton Rancheria Indians being able to achieve federal recognition as a tribe.
Shorty after Wilton Rancheria received federal recognition many of Ione Tribal members from Amador County relinquished their membership from the Ione Band in order to enroll in the Wilton tribe. These Ione members now Wilton Rancheria members are Amy Dutschke family members. Amy Dutschke is the Pacific Regional Superintendent of the Bureau of Indian affairs who is fast tracking the Wilton Tribes fee-to-trust application. These members want a Casino, that why they switched tribes because Wilton's Casino proposal was moving quickly.
Ms. Dutschke's family voted to disenroll our families allowing them to move into leadership at the Wilton Tribe.
Ms. Dutschke's decision to recommend approval of this casino proposal creates a serious conflict of interest. Her decision will financially benefit her family members and indirectly and potentially directly benefit Ms. Dutschke herself.
The Wilton Rancheria Gaming Application presents real concerns about potential corruption in the decision making at the Bureau of Indian Affairs.

Posted by OPechanga at 5:54 PM

Sad to see that greed and politics run thick in NDN country. Culture, community, traditions, family over everything....except when a casino is about for be built. Hope they figure it out. Sovereignty and strength in numbers can create unity and revitalization. Without it, you have divisiveness and entitlement. Wake up people!

WE need to shut the B.I.A. down is causing to much misery"..

This story reminds me of BIA employees named Carol Rogers Davis. Always was trying to get herself/relative enrolled 🤔. She even tried to be enrolled and tribes nearby. Seems VERY "CONFLICT OF INTERESTY"

Not really a conflict of interest. The interest of the BIA is protecting and promoting tribal leaders. No matter what lip service the DOI gives to the trust duty obligation, tribal leaders come first. The reason why is money. Tribal members don't have much so they are pawns. This is not a violation of federal regulations or the mission of the BIA. They are committed to tribal leaders and share the leader's interests.

Helping tribes with gaming is rewarding for BIA employees. Enrolling relatives in gaming tribes is also rewarding. There is no court in the land that will hear cases about BIA corruption. The US Attorneys Office will not prosecute. Even when the BIA lost (stole) $3 billion of IIM accounts no BIA employees were held culpable (Cobell).

Just the way it is.