The acting secretary of the Army has ordered the Army Corps of Engineers to allow construction of the Dakota Access pipeline under a Missouri River reservoir, a North Dakota senator said, the latest twist in the months-long legal battle over the $3.8 billion project.
The Standing Rock Sioux, whose opposition to the project attracted the support of thousands of protesters from around the country to North Dakota, immediately vowed to return to court to stop it.
Sen. John Hoeven announced late Tuesday that Robert Speer directed the Army Corps of Engineers to "proceed" with an easement necessary to complete the pipeline. Hoeven said he also discussed Speer's order with Vice President Mike Pence, just a week after President Donald Trump signed an executive order signaling his support for the project.
A spokesman for the U.S. Army did not respond to requests for comment Tuesday night. Hoeven spokesman Don Canton said Speer's move means the easement "isn't quite issued yet, but they plan to approve it" within days. 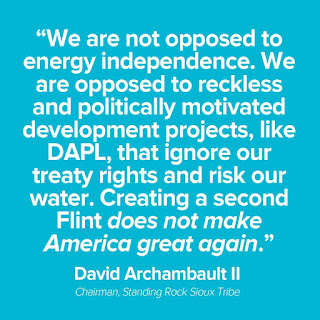 The crossing under Lake Oahe, a wide section of the Missouri River in southern North Dakota, is the final big chunk of work on the pipeline designed to carry North Dakota oil through South Dakota and Iowa to a shipping point in Illinois.
The pipeline has been the target of months of protests led by the Standing Rock Sioux, whose reservation lies near the pipeline's route and who have argued that it's a threat to water and tribal artifacts.
The tribe has vowed to challenge any granting of the easement in court, and Chairman Dave Archambault renewed that vow Tuesday night.
"If it does become a done deal in the next few days, we'll take it to the judicial system," Archambault said. He added: "This is a good indicator of what this country is going to be up against in the next four years. So America has to brace itself."
READ MORE here

Goes to show how much Trump cares about Native Americans and their
Safety and health.
He might lose the almighty if this deal fails.