We are getting reports that after yesterday's federal hearing in San Francisco, the disenrollment of some Elem Colony members, initiated by a corrupt tribal council which we discussed HERE and and with BIA employee interference HERE...has been halted.  They are due BACK in court on March 16. 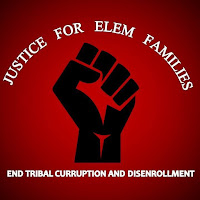 However, the first victory for our families is that the Judge got El-President Garcia to state under oath that the letter notification of Dis-enrollment to our members was illegally sent out as he didn't have a prior approved Disenrollment Ordinance! ( In other words"My Bad!)
I wanted the Judge to require a letter be sent explaining this to all Elem members and the federal tribal organization I.e IHS, LCTHC and BiA.

So the Judge instructed us all to attend the next Tribal meeting on February 11, 2017 and to document our treatment! Ironically, El-Mexicano Garcia, Said that the Disenfranchisement Ordinance was approved and that they will continue with disenfranchisement. The Judge ask why would do this to this group of members, he stated that all these members. Elders, children and cultural leaders and families are hoodlums, cheaters and lier's! This families real Documented corruption will be exposed in a upcoming documentary! The gloves are off!! I also hoped that the Judge would've required neutral observation by an independent source.

The reason why is we get set up as we are starting the violence, when it's The Younger brother of Augustine who acts out, instigating arguments and violence, then they claim we started it and exclude us from the meeting, in our Tribal community, he suffers as a victim of 'Child molestation.

I hope there were video taping in the Courtroom, I was looking for a bailiff to report his sick childish behavior, as he was making faces and taunting our family members in the Courtroom this dysfunctional behaviors have been allowed as 95% of this council is his immediate family members Mom Sarah Garcia Secretary Treasurer is the real person in control! The judge also wants documents showing how we have been denied services by LCTHC and other Tribal organizations! All My Relations


132 Elem Pomo Indians, are being exiled from the 52-acre Elem Indian Colony under guise of “disenrollment” and “banishment” by a faction of off-Colony members. Those 132 Pomos comprise 100 percent of Colony residents, who, if jettisoned, would leave an empty Reservation. Despite disenrollment and banishment becoming widespread, especially in California, it would be unprecedented for a tribe’s entire residency to be exiled.

“Nobody questions our ancestry. Because who we are can’t be questioned—we descend from Elem Pomo ancestors and founders,” said Robert Geary. “This is instead a feeble attempt by non-resident members of the Elem Colony to exact control over tribal monetary resources without wanting to live here, and even at the risk of terminating our entire Colony.”
Posted by OPechanga at 11:12 AM