Oh SHUT UP Senator FAUXAHONTAS, YOU are Despicable

Oh for Pete's SAKE, FAKE INDIAN Elizabeth Warren, a harpie of the first magnitude releases this tweet yesterday after Jeff Sessions was voted in as Attorney General.


If Jeff Sessions turns a blind eye while @realDonaldTrump violates the Constitution or breaks the law, he'll hear from all of us.
— Elizabeth Warren (@SenWarren) February 9, 2017

WHERE the HELL WERE YOU  Senator, when AG Loretta Lynch turned a BLIND EYE to abuses in Indian Country? Abuses of CIVIL and HUMAN Rights you hold most dear? 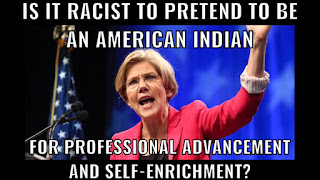 WHERE were YOU, Senator, when  Eric Holder turned a BLIND EYE to abuses in Indian Country.  We only heard CRICKETS from YOU and not the screeching we heard this week.

SHUT UP and DO YOUR JOB and stand up for the Trust Responsibility for Native Americans.  OH, WAIT, since you aren't ONE....who cares Right?

Posted by OPechanga at 9:44 AM