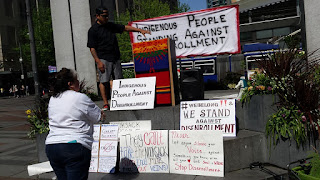 Turtle Talk has the filings of the Nooksack Tribal Council, led by adoptee Bob Kelly which is currently unrecognized by the Department of Interior for it's failures to follow court orders....suing...in court..for it's failure to recognize the current Nooksack Council...

This is an action to compel the defendants to fully fund contracts awarded to the Tribe under the Indian Self-Determination and Education Assistance Act, Public Law 93- 638. Defendants have a non-discretionary duty owed to the Tribe to provide required funding for the awarded contracts and have failed and refused to perform those duties.

3. Finally, this is an action to compel the defendants to cease and desist in their arbitrary and capricious refusal to recognize the Nooksack Tribal Council as the governing body of the Nooksack Tribe, to take all necessary steps to withdraw the erroneous, arbitraryand capricious determination of former Principal Deputy Assistant Secretary Lawrence Roberts that the Tribe lacks a quorum to conduct tribal business, and to notify all agencies and persons with whom Mr. Roberts’ determination was shared that the determination was erroneous and without force or effect.
Posted by OPechanga at 4:23 PM

Mr Cline,
In the last of the filing points it claims, to notify all agencies and persons, and I quote: "to notify all agencies and persons with whom Mr. Roberts’ determination was shared that the determination was erroneous and without force or effect."
I understand your comment about do process,
Yet you lack a comment about all of the letters written to the nooksack tribe asking for proper do process to happen.
Mr. Cline What was the response to all of the letters from the BIA addressed to the nooksack council informing them of what would happen if or when they did not hold legal elections. We as an Audience are willing to listen to you.

Yes, hi Mr. Cline
One more question about our posting and concerns .
The letters I'm referring too? You wouldn't happen to know if the BIAletters that led up to this law suit, are they public record ? I only ask for the Audience to be fully in-formed .
Thank you

The BIA letters have been posted here on OP, so they have been made public. The BIA clearly informed the Nooksack Tribal Council that an election must be conducted that included those members targeted for disenrollment in order to fill four seats on the council that were empty due to expiration of terms. The members targeted for disenrollment still retain voting rights and must be allowed to vote in any election according to a tribal court decision.

This lawsuit is frivolous on its face. The court will dismiss because the remedy the Nooksack Tribal Council seeks cannot be compelled by the court. Since there is no law or regulation defining the recognition of elected officers it is an aspect of the government to government relationship that is committed to agency discretion.

Hope the BIA is reading. The Nooksack Tribal Council meets the definition of rogue leaders interfering with members benefits as described in California Valley Miwoks v. Salazar, and operating an anti-majoratarian scheme through the manipulation of the electorate.