NCAI Has PLAN on Tribal Disenrollment: National Congress of American Indians Will Introduce ....

After more than a DECADE of sitting on the sidelines, as tribal disenrollment ravages Native Americans throughout the country, the National Congress of American Indians has a strategy.

We think it's coded named   WRAPS 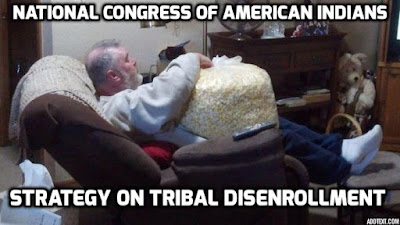 Watching, while elders die without justice, and children are stripped of their heritage.
Refusing to speak out, while falling into "safe issues" traps like nicknames and global warming
Appeasing those Tribal Leaders who abuse their own people, their own families, their history.
Prevaricate when asked about the issue; say Tribal Sovereignty  numerous times.
Sidestepping the difficult topic of tribal genocide; not on next meeting agenda

What is the purpose of NCAI any way, to get together and party on the governments dime? That's what happens at their conventions. What is it they have accomplished? Just curious.

The most ironic documents have been found!! The family fron San Pasqual that says the LaChappas do not belong to San Pasqual are actually La Chappas themselves.

What documents? You f***ING liar Lawson!!

Neither the NCIA nor the BIA care about the INDIAN NATIONS. The indian people dont even care about their own people, why should they! Tribes are over ran by corruption and making up the rules as they go along filing it under their famous declaration "soverign nation"