WE have APARTHEID in CA, under Democrat leadership on tribal reservation in Temecula 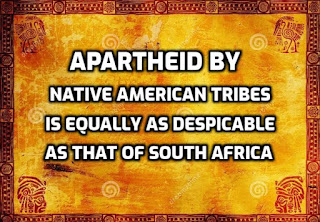 The Pechanga Band of Luiseno Indians still practice APARTHEID on the reservation in Temecula: Democrats LOVE their campaign contributions.

APARTHEID as described by the dictionary is:
a•part•heid
any system or practice that separates people according to race,caste, etc
Pechanga is doing just that, determining that families with historical ties to the origins of the reservation are ‘no longer pure’ in their eyes. They may be Temecula Indian, but “they aren’t Pechanga.” Even though the expert hired BY Pechanga proved that we were.
Here are some similarities to the Apartheid system you are familiar with:
South Africa - Strategists in the National Party invented apartheid as a means to cement their control over the economic and social system.
Pechanga - Splinter Group invented disenrollment as a means to control membership during a time of new economic growth (Pechanga Resort & Casino).
South Africa - Initially, aim of the apartheid was to maintain white domination while extending racial separation.
Pechanga - Initially, aim of the Splinter Group was to dominate the tribe while instilling fear in other members.

South Africa - Africans living in the homelands needed passports to enter South Africa: aliens in their own country.
Pechanga - Descendants of original allottees that have been disenrolled have to verify their reasons for entering their own land. An entire family of Tosabols have been denied access to use the roads to go to their property because of their banishment. Their crime? Nothing, they were never charged, just banished.

Posted by OPechanga at 2:01 AM