BOYCOTT PECHANGA Casino for Violating the CIVIL and Human Rights of their people, stripping identity and heritage from Hundreds.

Or, you can boycott GOYA, because it's CEO said a nice thing to our President.  Or you can boycott Nike because their spokesmodel take a knee. Both equally stupid in comparison. 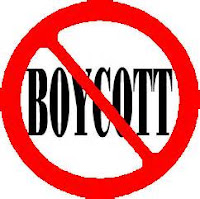 A boycott is a form of consumer activism involving the act of voluntarily abstaining from using, buying, or dealing with a person, organization, or country as an expression of protest, usually for political reasons

California Indian Tribes like: Pechanga Band of Luiseno Indians (Temecula), Redding Rancheria (Redding) Picayune Rancheria (Coarsegold, near Fresno) and the Nooksack Tribe in Washington state are just a few of the tribes that do not deserve your patronage. Yet one has to wonder, how many GOYA boycotters will still got to these venues?  Or Colin Kaepernick haters?  Right or left, same bird?

Here is what the gaming tribes mentioned, as well as others told within this blog  have done to members of their tribes:

•Stripped tribal members of their citizenship
•Denied voting rights to members
•Taken away rightful healthcare to seniors
•Blocked access to land on the reservation
• Denied members due process of law, including legal representation, to confront witnesses, even writing tools weren't allowed.
• Prohibition of practicing religion, including the right to pray at their ancestor's graves.
• Threatened others if they speak out
• Subjected some to ex post facto laws.
• FORCED a family to exhume the bodys of ancestors to prove lineage, then ignored the findings

Many will say that "well, they are sovereign nations, they can do what they want". Of course they are, and Arizona is a sovereign state that passed its laws through the democratic process too, remember when CA politicians boycotted Arizona.

South Africa was a sovereign nation too, they had the right to pronounce Apartheid as a policy. But in the tribe's case, many or most have acted OUTSIDE their own constitutions. Just as the boycott of South Africa worked to eliminate apartheid, so can boycotts work to show these casino tribes that "violations of civil rights don't pay".

Many have said, "why should we care? It's just a small tribe". These money making tribes are using money stolen from tribal members to influence politicians. Tribes like Pechanga tried to keep Californians from exercising their RIGHT TO VOTE on their expanded gaming propositions, with the Feds help. And to put it in perspective, the sovereign nation of the Picayune Rancheria eliminated almost 50% of the tribe. That's equal to eliminating 16 MILLION in California's population. Pechanga eliminated the equivalent of 8 million citizens in order to increase per capita payments and to control votes.

Yes boycott Goya but not Nike and Kaepernick.

I hear you tribal members that were disenrolled but have you ever thought of increasing your base?

I have been a victim to the COVID-19 layoff and because of favoritism and non stop as kissing I don't believe I will be called back to work nor do I really want to go back during COVID-19 and because the casino allows too many players at one table and nothing really changed except for masks and plexglass.

I used to die laughing inside hearing tribal members tell Pechanga employees their business structure was not a coporate structure but rather it was a family strutted and employees were treated like family. Can you believe the majority of casino employees believed this bullshit?

If Pechanga treats it's employees like family then myself and many employees much be the ugly stepchildren.