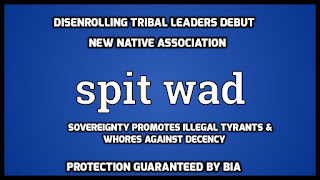 Tribal leaders of casino gaming tribes have been forced to curtail their travel due to coronavirus, saving tribal funds at the expense of their travel benefits.

Many leaders are used to travelling willy-nilly with no accountability on expenses, (first class, suites, steakhouses, girls).   Mark "Two Homes" Macarro, the one-time popular leader who has been accused of being a tyrant, used to bring his brother and family on European trips, when his lawyer brother had no involvement in gaming.

Robert "we are sovereign" Smith of Pala, invested tribal money not approved by the general conncil

How will these and other corrupt council people survive with the frequent flyer miles?   Will the new POW WOW avoidance plans help tribes vs. their tribal leaders?

Might we see some tribal council members spent their OWN MONEY?
Will Kangaroo courts continue on schedule.  Might they allow process servers on their rez...for a fee?

Speaking of Robert "we are sovereign" Smith of Pala.
I anyone deserves to catch this virus it is HIM and NIETO.
Feed that fat fuck a virus meal please.