TREASON & SEDITION BEING CHARGED AT CHUKCHANSI by AYALA FACTION.

Letter going out at the Picayune Rancheria of Chukchansi Indians by the Nancy Ayala Faction that charges TREASON and SEDITION against the Tribe.  The PUNISHMENT and PENALTIES are being enforced before the hearings.

As you can read, ALL RIGHTS as a Tribal member have been suspended.  I guess that means that anything that is said now, by those "under review" can not be held against them. 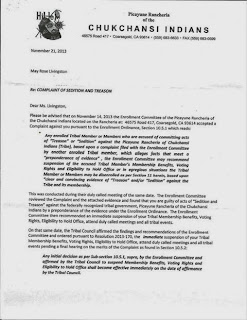 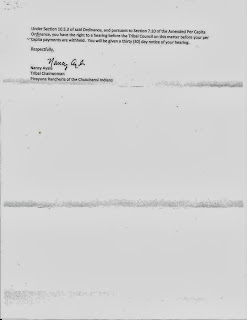 THIS DEMANDS ACTION by ALL OF US.  Get your letters ready.
Posted by OPechanga at 1:26 PM

ARE you freaking kidding me? What is the BIA doing? First they allowed violence and now violations of rights?

Will the Ayala faction burn down any of their homes on the reservation?

Is Nancy going after Lewis voters?

Nancy will dis enroll all who oppose her ways (600 people) On Dec 14th a special meeting held by Reggies faction will dis enroll all of Nancys people(about 300). Both factions will present this mass dis enrollment of THE ENTIRE TRIBE to the BIA. What will BIA think of this terrible mess? I think it is time to pull our recognition EITHER WE ALL WIN OR WE ALL LOSE Am I wrong to want this for my tribe?

Doesn't surprise me... we've put up with kind of crap for years!!