Tribal Disenrollment Protest in Sacramento: More of the story 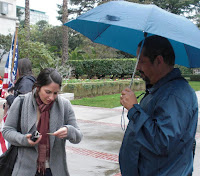 
Poor Magazine has done a story on the protest in Sacramento agains tribal disenrollment. The reality of how many have been hurt by California's tribes primarily is finally gaining its voice. Thank you Chloe, for being there to hear our tales of corruption, civil rights violations by our OWN TRIBES.


On February 5th, 2009, I approached the State Capital in Sacramento for the first time in my life. I find it fitting that my reason was to witness a protest at its doorstep, California Native Americans uniting to charge certain tribal leaders with corruption, and to urge congress for more oversight and regulation. As the crowd trickled onto the north-side grounds of the building, those associated with the press started to make themselves known. As this was my first time working under this designation, I momentarily stepped into voyeurism to see how the others operated. At one point, a man obviously affiliated with some variation of corporate media stepped onto the scene with his large camera equipment and loudly asserted, “I need to get a statement from someone here, I don’t really care who,” only to get his brief interview and then promptly leave without gaining perspective on any of the happenings. I decided this was not the approach I wanted to take, so I went about my own way of piecing together the context for the event.

The crime is the unjustified disenrollment of Native Americans from their traditional tribe, not only stripping them of their ancestral right to belong, but also the educational, medical, and financial support provided by their governments. The root cause is an alarmingly inequitable distribution of casino earnings, triggering immense poverty on certain reservations, while others reap the benefits of an industry with annual revenue in the billions. “Reservations are essentially third-world countries here in the US, some operating with no running water, electricity, or stable education system,” said Quanah Brightman, Vice President of United Native Americans Inc., the hosts of the protest. He asks a very fair question, “Where is all the money going?”

Click the link above for the rest of the story
Posted by OPechanga at 2:30 PM

Glad to see we're getting noticed. And we're are not just the few "corrected mistakes" in tribal enrollment. It's a growing disease.

It is great to see our relatives on the front lines!

THIS WILL BE MADE RIGHT!

I realize a lot of the focus has been on what happened at Pechanga but as Cideways says, disenrollment is a disease and it is reaching epidemic proportions all accross Indian Country, especially in California.

In tribe after tribe, especially those tribes with gambling casinos, disenrollment is off of the charts compared to what in the past really was a few isolated incidents of corrections in the enrollment rolls.

At Pechanga, chairman Mark Macarro likes to say that disenrollments occurred before there was ever a casino but what he fails to mention is there were never entire family lines wiped out by the stroke of the pen.

True in 1989 some people were disenrolled when they couldn't prove they were direct descendants of original Pechanga member Manuela Miranda.

Ironic that the tribe concluded in 1989 that M. Miranda was Pechanga but reversed that in 2004 when they kicked out all of M. Miranda's descendants.

Also ironic is the fact that some of the very people who claimed M. Miranda was Pechanga in 1989 were saying just the opposite in 2004.

Added on to the the fact that the other large family line eliminated, the Hunters, some of them had their enrollment cards and congratulation letters welcoming them to the tribe signed by some of the same people who voted them out of the tribe or submitted letters opposing their membership in their disenrollment of 2006.

So people who said years ago that the disenrolled are Pechanga but years later now say that they are not?

So are these people stupid or just corrupt.

I don't want to insult their intelligence so I guess they are just plain corrupt.

Thank you to Chloe for a wonderful piece, and thank you to all of the people that showed up in support. Well done everyone.

Hey! Who's that good lookin' guy with Chloe?