Holdover Councilperson Katherine Canete calls the Nooksack 306 and their ancestors "terrorists." Pure hatred, and hardly the language you would expect from a tribal leader, but then, nobody ever accused her of leadership.

Under her "leadership" both tribal casinos were shut down, her council FIRED A JUDGE for ruling against them, the government withdrew services, the courts slapped the tribe down, their forced evictions were halted....  that's certainly NOT..."WINNING" and WHO acts like a terrorist? 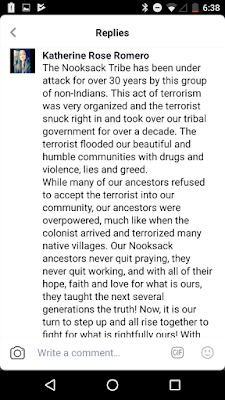 Posted by OPechanga at 8:21 AM