Guy Who Worked With Tribe that Abused Their OWN PEOPLE, Wants Transparency for Others UPDATE: Schmit responds

The author of this hit piece Charles Banks-Altekruse promoted the North Fork Rancheria's attempt at off reservation gaming, and also did work for the Robinson Rancheria a disenroller until recently.  He  reportedly did work for the ENTERPRISE RANCHERIA, WHILE it was disenrolling and abusing their members, now, he wants transparency for Stand Up's Cheryl Schmit  We have asked for comment from Schmit, but have not had a response as yet.

This public relations person (who also represents North Fork and Enterprise both seeking off reservation casinos)  obviously hired by the Tribe and Boyd Gaming is attempting to change the narrative.   The issue is the citizens of Elk Grove were not provided an open, fair or transparent process by the Bureau of Indian Affairs or the City Officials of Elk Grove.
Moreover, the Regional Director Dutschke is involved in the decision-making in this case. The Regional Director, shares extensive family ties with members of the Wilton Rancheria. These ties present a clear conflict of interest. The Record of Decision was signed by Larry Roberts who lacked the authority to sign as a Principal Deputy Secretary and Michael Black lacked the authority to take land into trust.  There must be a thorough review by the IBIA.  Otherwise,  any decision to take land into trust will be inherently tainted and subject to investigation. 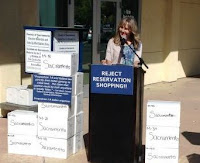 The Elk Grove City Council was correct in asking hard questions of Cheryl Schmit, the director of Stand Up for California!, regarding her intervention in the proposed Wilton Rancheria casino project.

People deserve to know whether this self-proclaimed ‘statewide gaming watchdog’ is indeed independent of conflicts of interest – or merely a ‘guard dog’ for established casino tribes and card rooms, as many suspect.

Schmit’s muddled explanation of her relationship to gaming interests during the Elk Grove City Council’s February 8 session (she seemed to deny working on behalf of gaming interests, while also admitting receiving millions of dollars from them) leaves much to be explained. But this is nothing new.
For years, Schmit has walked a fine line in California gaming wars, lines so intentionally blurred that it’s difficult to decipher what she truly stands for and which side she’s on.  (OP:  I'm thinking she's NOT on the side of the WILTON RANCHERIA, which has disenrolled the very family on whose graves they are trading on for a casino?)


As far back as 2003, a Los Angeles Times article called into question Schmit’s motives and tactics and highlighted her connections to card rooms, Nevada casinos, and casino employee unions.
To anti-gambling community crusaders fighting tribal casinos, Ms. Schmit can appear to be a savior swooping in to organize and over-amplify opposition, regardless of whether such opposition is marginal or mainstream.

To an over-stretched media, Schmit is a polished and easy go-to figurehead, a convenient spokesperson and “foil” to casino proponents.
To the gaming industry, Schmit is a masterful dissembler, a stickler for the arcane technicalities of federal Indian gaming law that she deftly contorts to create unwarranted confusion and controversy – not to mention lawsuits around legitimate gaming projects.  (OP: Technicalities?  He means...the LAWS right?)


A review of Schmit’s positions and comments over time are not clarifying: She often portrays gambling, especially “Las Vegas-style” gaming, as detrimental to communities – yet, she has openly supported and acknowledged the overall positive socio-economic impacts of her own local pet casino, Auburn Rancheria’s Thunder Valley facility, on its adopted community of Lincoln.
Schmit adamantly demands local control, support, and agreements for tribal gaming projects – yet, she has obstructed locally popular projects, sometimes parachuting in late in the process to disrupt years of careful, respectful, and collaborative negotiation between jurisdictions and prospective gaming partners.

And perhaps most cynically, Schmit rails against so-called “off-reservation” and “reservation shopping” gaming projects, a complex and rigorous process whereby “landless” tribes can apply to acquire new trust land eligible for gaming – yet she has conveniently skipped over the fact that the Auburn, Paskenta, and Mooretown tribes, backers of her campaigns against other tribal gaming projects, also moved off their historical lands.  (OP: Everyone only cares when it's THEIR OX being gored.)

Outside the gaming industry, Schmit has carved out a hearty reputation – and likely living – with her anti-gambling role. Insiders believe her true role is as an anti-competition shill who prevents the further expansion of gaming in California to protect the interests of established casino operations and squash competition and new market entrants. In this world, the enemy of my enemy is my friend.

This may explain why Schmit now turns her attention to Wilton, a tribe that has worked hard to cooperate with local communities but poses a potential threat to Auburn’s historical dominance of the Sacramento market.

Trailing Schmit are the high-priced lobbyists, lawyers, and PR spin doctors – mercenaries who fight for and against tribes and gambling – along with the mysterious petition sponsors, misleading signature gatherers, shadow organizations, and questionable lawsuits. (OP: Takes one to KNOW ONE?)

Who exactly pays for such activities? (OP: As long as it's not taxpayers..)

It’s time for Schmit to abide by the same standards of transparency and accountability that she demands of her adversaries, beginning with a full, open accounting of any co-mingling of personal, business, and nonprofit finances and transactions.   (SHE should do this....right after tribe's open their books, as well, right?  Sauce for the goose)

Schmit’s high-visibility public position in California’s casino wars, that she has carefully cultivated, warrants full disclosure in order to identify or eliminate all appearances of conflicts of interest. Local officials, citizens, tribes, and media deserve nothing less.

Schmit’s refusal to cooperate would be hypocritical and itself speak volumes. Should no connections to the gaming industry be found, then nothing has changed.

But if connections are established – beyond the millions in campaign donations she’s already admitted to – then Schmit’s objectivity and credibility would be impugned and her position as an independent source of information working on behalf of communities would be seriously undermined.
It’s time to stand up to the bullying tactics of Stand Up to California!
Posted by OPechanga at 7:14 PM

If it bugs him so much he should request form 990 for non profit corporations from the IRS. Stand up for California is a non profit.

One great thing about "True Blood Native Americans"~ We can see right Thru "All the trensparent bull shit" ~ This Schmit’s motives and tactics, are plainly about "MONEY"...this Transparent hoesky is about hers and getting hers..
Common now. Any real spiritual native american see this..

How come you didn't mention Mr. Robert Smith Dutschke, he is the Chairman of the California Land into trust Consortium.
He and wife Amy Dutschke are corrupt, way more than Trump.