RYAN ZINKE Overwhelmingly Confirmed as Secretary of the Interior 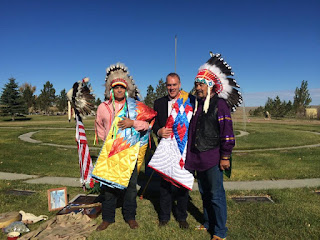 The Republican-controlled Senate approved the nomination, 68-31 as 16 Democrats and one independent joined with 51 Republicans to support the choice. Several Democrats from Western states as well as those facing tough re-elections next year, including Montana's Jon Tester, Indiana's Joe Donnelly and Joe Manchin of West Virginia, voted for Zinke.

Sen. Maria Cantwell of Washington state, the top Democrat on the Senate Energy and Natural Resources Committee, said she is not convinced that Zinke will be able to "stand up" to Trump and prevent oil, gas and mining companies from unduly exploiting public lands
Cantwell also said Zinke appears willing to support transfer of some federal lands to states, citing his vote for the GOP-sponsored rules package. She worries that Zinke may weaken or repeal recent designations by President Barack Obama of national monuments, including Utah's Bears Ears monument.

Posted by OPechanga at 1:04 PM