Are you close to Tucson?  If so, you should attend this.

The “Who Belongs? From Tribal Kinship to Native Nation Citizenship to Disenrollment” Conference will be held at the James E. Rogers College of Law, University of Arizona, March 9-10, 2017. 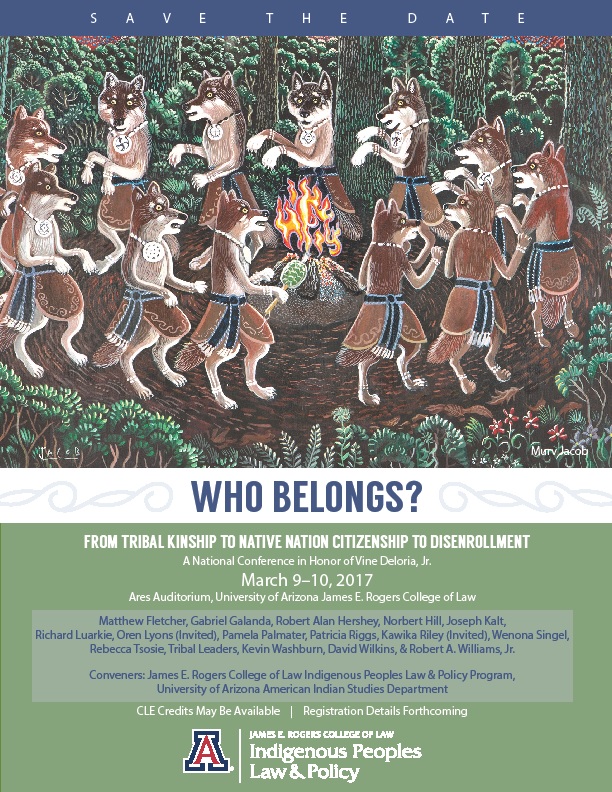 This first-of-its-kind conference will bring together prominent scholars in the field of Federal Indian Law, International Law, and American Indian Studies, as well as tribal government officials, to discuss recent trends in Indian Country dealing with citizenship and community belonging, including disenrollment.


“The conference is designed to address the sensitive issues surrounding who has a hereditary and/or cultural right to be a part of a Native and Aboriginal community, and what are an individual’s responsibilities to that community,” said conference organizer Professor Robert Hershey. “It is our hope that an atmosphere of respect, understanding, listening, and learning will be fostered, and that our gathering will promote utmost dignity.”

Additionally, as highlighted last month by the New York Times, disenrollment has reached an epidemic level, with as many as 9,000 Native Americans having been jettisoned from nearly 80 tribes in recent years. As Professor Robert A. Williams, Jr. (Lumbee) recently stated in the New York Times, “It’s almost become an industry in some parts of Indian Country.”

The conference is designed for attendance by tribal leaders and citizens, tribal and federal government officials, attorneys and advocates practicing Native American and Indigenous Peoples law, Native and Indigenous people, officers of tribal enrollment and constitution reform committees, and faculty and students of American Indian Studies and law.

I pray this conference produces some good results that help the wrongfully disenrolled. Every single solitary day we live the hurt of disenrollment in some way. Depression, anxiety, distress, fear. Even though life goes on, we will never be completely whole again until we are exonerated and re-enrolled, because it feels like we have done something wrong even though we are in the right. That is how you know when you are right because the guilty try to turn it around on you and make it seem like it is your fault, like Robert blaming King in the beginning for all of the disenrollments.

Robert new that if he didn't get King and Willy Pink out of the meetings and away from the Members that they would expose his guilty doings as the Chairman.
So he put it all on Kings shoulders and ran with it.
Kink and Willy were only trying to help the Band by the things that they were doing, and it was all true as you will see in the near future.
Robert Smith is guilty of so many things that are wrong, and that's putting it lightly.
When the were asking for certain info on the financial status all Robert and Neito had to do was approve an Audit and the truth would have been known to all the members.
Instead Robert Smith decided to rid the EC of the rumors by banding them from all future meetings and for running for any kind of office in the Tribe including any seat on the EC.
So then Robert got Theresa Nieto and Dion Perez to motion to disenroll the other 154 legit Tribal Members and he also blamed King Freeman for that by saying that that's what King wanted.
Like when did Robert and the EC ever give a shit what King ever wanted.
It wasn't what King wanted, Robert just used that as an excuse to blame King and get what he wanted.
King was exposing Roberts mother concerning her stealing from the Tribe and also the fact that at a meeting back in the old Tribal hall a motion was made that none of Marie Smiths could ever hold a seat on the EC and work for the Band in any position.
The motion passed and us carried.
So that's why Willy and King were ousted from the meetings and Roberts final decision was to disenroll them from the Band and he did so to Willy Pink without and vote from the General Membership.
This was a violation of the Band so called constitution.
It is up to the Tribe to take these actions, it is the Tribe/Band that is supposed to make the decisions of who belongs and who doesn't.
And that's what the Supreme Court has said," A TRIBE HAS THE RIGHT TO DESIDE THEIR MEMBERSHIP", it does not say that THE EC HAS THAT POWER.

That's exactly right. In fact back in the 80's the tribe voted on the margarita britian issue. And she was determined to be 4/4 by the tribe. Here it is 20 years later and robert doesn't agree with the tribes decision so he decides he wants to vote on the issue again but this time he doesn't allow the tribe to vote on it he only allows the EC to vote. It's the tribes right to determine membership not just the executive committee. These tribal leaders are dissenrolling legitimate members because of personal grudges. They are hurting there own people. Pala members need to unite and put a stop to Robert. He's ruining our rez

Can't vote him out, elections are rigged.
Can't make any type of motions at the meetings,-Not on the agenda.
Can't kick his ass,= has body guards.
Any ideas are welcome.
Maybe he will die soon.= possible his health will take him out as soon as the Devil makes room for him.
Other than that the only other option is BANG.

Why aren't the FEDS helping us out by putting them in Prison.
Aren't they suppose to protect all Citizens from Civil Rights violations and corruption.