After more than a DECADE of disenrollments, we finally have more supporters rallying against this disgraceful actions by corrupt tribal governments.  Joining this blog in the fight, are prominent Indigenous Artists and Leaders.  MANY OF YOU ask, who will help us...well NOW, you have your answer. 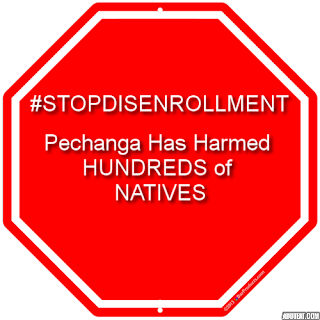 Email ThisBlogThis!Share to TwitterShare to FacebookShare to Pinterest
Labels: #stopdisenrollment

Hello. I am Scottish Born . I have been a resident of 2 states .N.Y.N.J. I have also been a resident of 2 provinces . Nova Scotia , Ontario. My children and Grand children are First Nation people. MI'KMAQ and MOHAWK. GLOOSCAP First NATION And SIX NATION .... My son feels I should have remained on band list??? I am now A Canadian Citizen. what is disenrobment??? Regards Patricia.

Disenrollment is removing tribal citizens from their birthright of being in citizens of their Indian nations and is often done without due process and proof that the people are not legitimate citizens of their tribal nations.

Here in California in particular but elsewhere as well it is mainly done in tribes who own gambling casinos and the remaining members in the tribes often get a larger share of casino profits because the tribes have less people to share the money with.

Whole family lines are written out of history by the stroke of a pen and they do this by saying people's ancestor(s)were not members of their tribes. So they pick on dead people who cannot defend themselves and people who for generations have been members in good standing in their communities are suddenly on the outside looking in with no legal recourse to remedy the situation.

Here is the beginning of a movement to help those disenfranchised by disenrollment. All those affected should join forces with these outspoken people to create a loud noise that will resound in the halls of the Capitol building.

No that is not a fair evaluation. I am Still Scottish Of Highland Gaelic ancestry and Irish On my Dads Ancestry although they where born in Govan Glasgow. Terrible. No wonder white people are saying native people do not take care of each other.. my children get Monies from the small gaming on Glooscap... Should not be allowed as I believe my ex husband Eugene got hooked on gambling.....My And so many young woman disappearing sad indeed. Maybe they got hooked and Gave in to other things SAD indeed.... thank you for your information... Just talking about Indian girl now KIDs taken away . Sad feels betrayed by Tribe.... sad... Thank you for information.... regards Patricia.... Cheers from BONNIE SCOTLAND Welcome anytime ....

How does that fake voting machine work that keeps mark macarro elected?

Is it pre set? or do the knuckle head members just dont care?

Temecula BAND Indians were not separated from Pechanga Band by our Ancestors during Pechanga reservation creation. Why would members today dishonor the creation, and recorded history of our Ancestors? Why would dishonoring others be our custom and tradition actions?

Why would a Band think it's ok to take others rights away, but have rights to settle actions from outside the Band? Pechanga takes away rights of Allotted heirs and members of the Band, then wants to settle issues from the US Government? Our Ancestors ALL need to be equal and honored. ALL rights should be equal. ALL

#stopdisenrollment needs to start calling out tribal leaders that are using disenrollment not as a tribes right to define its membership but as a tool to get rid of opposition and votes. Or I Pala's case for the Chairman and treasurer to have access to more money. Pala's Robert Smith and Pechangas Mark Macarro are one of the biggest violaters of this. Let's put their names out there let their name be known as corrupt tribal leaders hurting their own people.