Tribal ACTIVISM isn't ONLY a Protest March, It's The DAILY GRIND of Communication and Education. GET OFF THE SIDELINES, STOP Letting the Corrupt Like Macarro, Smith, Lawson Get Away With The Abuse

At the beginning of the year, I posted and article about those aggrieved getting of their ass and DOING SOMETHING.

Those of YOU that have been sitting on the sidelines, waiting for others to do the heavy lifting, medium lifting and light lifting... YOU know who YOU are.

Whether YOU have been disenrolled, banished or placed in a moratorium, YOU have been abused by those corrupt leaders in power. They get away with it, because MOST of YOU have refused to stay standing.

As I wrote in the post: My Rights Have been violated, WHY won't anyone HELP? WHY should others help, when we don't help ourselves. I asked another tribal group what they were doing, as I hadn't heard from their team in a while. They stated that they were awaiting a tribal court decision. Well waiting is the same as doing nothing. 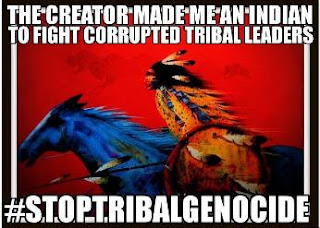 Emilio is a fighter, he has done some terrific work, that should put to shame many of those disenrolled that aren't doing.....jack.   Yet, they'd take any benefits due them, with not even a word of thanks.

Here's what I'm posting on Facebook:  ACTIVISM should be an EVERY DAY OCCURRENCE. No, you can't protest march every day, BUT, you can drive traffic to the site that's getting attention from both WASHINGTON DC...AND the corrupt tribes. If you can read this, you can open a new tab to hit this website and view multiple pages, tweet out posts and SHARE on FACEBOOK. THAT is ACTIVISM..

Don't let others fight your battles, don't shame your ancestors by doing nothing.  Stop being weak.  You CAN DO SOMETHING, just by letting your FINGERS DO THE WALKING...  Are you on Twitter?  You can share every post where with @USIndianAffairs  or @TheJusticeDept  @IndianCommittee  @SenJohnBarrasso    Don't let them say...  "we didn't know"  because you will know they are liars.     Stay in the fight....good things are happening, we have lawyers joining the fray, Tribes like Pechanga are LOSING in COURT..

As far as I know the same Pala Disenrollees that received your email, never received anything from Emilio, but we did get yours and we appreciate it very much. He must have sent it to some of the other Pala disenrollees. We are fighters, and we will be victorious one day. No one, especially some loser like Robert Smith and his Kronies, are going to take away my heritage.

Emilio has done extensive research without any compensation and should be much appreciate it. Other than having the disenrollment Facebook page and supporting the San Pasqual disenrollees in protesting, he has also done extensive research without pay for Pala, Tule River, Gabrielino, Mesa Grande, Pechanga, and Rincon. Much of the information out there and truth is out there because of him, the BIA knows he's actively supporting California Indians as well as the Senate on Indian Affairs incuding friends and family.

Pala Disenrolees are True Spiritual Warriors! Margarita Britten's Spirit is looking into Robert Smith's many homes every night knocking on the windows asking "why did you do this to me and my Children and their Children, I went to the heavens in 1924?" I grew up as a Comanche and Chiricahua Apache youth within our strong tribal and cultural traditions, myths, ceremonies and know that those to defile the "blood" our long gone Elders like Margarita Britten will pay for their errors in a just way. Let's get others out there to come forward since the federal courts are inadequate so let's push our true spiritual side to get justice done to the Disenrolled Pala Warriors.

Spreading the truth is very important. Our Ancestors deserve to be broadcast in the truth. The misinformation and liars will pay for all the bad acts now or after they leave the story. The creator had our Ancestors put through a lot of turmoil, and now to have factions inside a band put their heirs through turmoil is not what our Ancestors would ever do. Now with the truth being spread instead of lies and misinformation other bands who practice the Indian way are stepping forward and showing what custom and tradition is really about. Honor ALL Ancestors and live within custom and tradition even if we don't ALL agree. Disenrollment does not fix anything, it causes grief and disrespects elders and ALL our Ancestors. Spread the truth and the right thing will always fix the lies and misinformation.

I reviewed the documents Emilio sent and thanked him for his efforts. Unfortunately these particular documents did not advance our current state of evidence.

Thank you Dennis for your kind words. There are many warriors in our group, and the fight is far from over. The BIA, the Courts, and the Pala Band will get another volley of well aimed arrows soon. We need the support of all those who live the Indian Way.

May the spirits of our ancestors protect and preserve us all.

I am here to give testimony of how i got back my husband, we got married for over 9 years and we had two kids. thing were going well with us and we where always happy. until one day my husband started to behave in a way i could not understand, i was very confused by the way he treated me and the kids. later that month he did not come back home again and he called me that he want a divorce, i asked him what have i done wrong to deserve this from him, all he was saying is that he want a divorce that he hate me and do not want to see me again in his life, i was mad and also frustrated do not know what to do,i was sick for more than 2 weeks because of the divorce. i love him so much he was everything to me without him my life is incomplete. i told my sister and she told me to contact a spell caster, i never believe in all this spell casting of a thing. i just want to try if something will come out of it. i contacted traditional spell hospital for the return of my husband to me, they told me that my husband have been taken by another woman, that she cast a spell on him that is why he hate me and also want us to divorce. then they told me that they have to cast a spell on him that will make him return to me and the kids, they casted the spell and after 1 week my husband called me and he told me that i should forgive him, he started to apologize on phone and said that he still live me that he did not know what happen to him that he left me. it was the spell that he casted on him that make him come back to me. my family and i are now happy again. Thank you Dr. Aluta for what you have done for me i would have been nothing today if not for your great spell. i want you my friends who are passing through all this kind of love problem of getting back their husband, wife , or ex boyfriend and girlfriend to contact traditionalspellhospital@gmail.com and you will see that your problem will be solved without any delay. He cast spells for different purposes like
(1) If you want your ex back.
(2) if you always have bad dreams.
(3) You want to be promoted in your office.
(4) You want women/men to run after you.
(5) If you want a child.
(6) You want to be rich.
(7) You want to tie your husband/wife to be yours forever.
(8) If you need financial assistance.
(9) Herbal care
(10) is the only answer to that your problem of winning the lottery
Contact him today on: traditionalspellhospital@gmail.com

How do we get to the disenrollment Facebook page? We are fighters and want to help our people. thanks

The San Pasqual descendants support you, too. Please sign the petition at change.org. Every signature sends an e-mail to Amy Dutschke and Kevin Washburn.

Emilio can find documents upon documents. Unfortunately that is not the issue. We are disenrolled because of greed and Tribal Sovereignty. Not the question "if we belong" we know "we belong." But we have been duped by our tribal leaders and other members just sit on the sidelines because they to, know that they could be disenrolled. I read somewhere that Emilio isn't a Tribal Member nor ever was. Is that true? What Tribe is does he say he comes from? Thanks.

Emilio's family was disenrolled from Pechanga

At least Emilio is not sitting back letting things just happen, he is a fighter, and that is great. Keep finding documents because you never know if you might find the golden ticket of info. I know all disenrolled should appreciate his tenacity. This is our right, this is our fight.

Garbani's are the next family to go after the Tribal Elections.... talks are heating up.

TO ANONYMOUS 4:13: You mean Emilio's quote posted on the FB DISENROLLMENT PAGE: "I will not stop doing what I do because I'm not a federally recognized tribal member." Remember, there are individuals who are ONLY recognized by the State and some are in the process of Federal Recognition. And Anonymous 9:44, Emilio nor his family are disenrolled and are not Pechanga.