Excellent news!   Sen. Dianne Feinstein will investigate the issues that the San Pasqual Descendants have had with the B.I.A. and their continued obfuscation and delays in their FOIA responses. We wrote previously wondering if California BIA Director Amy Dutschke should be RECUSED in the San Pasqual issue as it seems she'd be judging herself.

Now, Sen. Feinstein has committed her team into looking into the issues.  Cover up? or Incompetence? 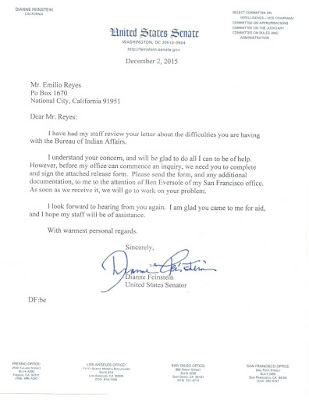 Thank YOU, Senator Feinstein, for doing what Senator Barrasso won't do.  Let's get the BIA doing their jobs and following the LAW.


Remember, the BIA has been sued for FAILURE in it's trust responsibility at the Pala Reservation.


Sen. Feinstein's staff should read this article about Amy Dutschke and how she operates.  Let's not let this federal department continue to withhold justice.
Posted by OPechanga at 5:00 AM

I hope this is good news, she is tricky, and she could just be appeasing him, not sure what to think yet, but time will tell. Good luck and I will be pleasantly surprised if she really does investigate and finds the BIA to be guilty.

You know how many times that letter has been written? She's a politician and nothing will come of it. Good luck though.

We should all sit back and do nothing, rather than work toward our goals.

Nice to see people spend the time to bring us down. It's effective, if that's what the goal is.

The TRUTH is we ALL can keep sharing the TRUTH! Our Ancestors deserve that and to be recognized. TRUTH will go a lot further than lies and misinformation.

for ALL nations...for ALL chukchansi people said...

dianne feinstein and her representatives in the fresno office, as well as senator barbara boxer and her fresno office representatives, have been well aware of what was occurring over the past TEN plus years with both table mountain and picayune....not only have indian country activists, including myself, been in both offices several times, but numerous memos, emails, and conference calls have been traded between those dedicated to the tribal disenrollment/nonrecognition issues over these years as well...shame on BOTH of these senators for not acting on an issue which they have known was festering--and becoming increasingly more explosive--over most of the past two decades! i truly hope that senators feinstein and boxer DO intervene--something that should have been done years ago and would have prevented much of the suffering which has not become the status quo in tribes disenrolling and refusing to recognize their own people....however, until senator feinstein and others prove through action they are interested in "walkin the walk", they merely give lip service to "talkin' the talk"....we shall see...

"I Agree with the comments of "9:48" and "10;21".
But there are...A few things, I have observed and know about a
"politician" in this era~ they do not like to Be "Cornerd" to an issue
and put on Blast or Endangered by there Online Reputation.
Thee Anonymous Movement knew this very Well.
As many of you "noticed" Lady Fienstien" Wants our Activist to Send
the the enclosed release form. with Additional documentation.
"then So be it"~ He will send This form to all those Addresses
that are below. And more..."We must hold this "beastly lady to her WORD'..as well as Mister Brandenburg who has made numerous sacred Oaths to California Indian Country.

"How many Times must We speak the truth
To stop the Web of lies..." ~Pontas. Blanco﻿

She has issued this letter over twenty times to different tribes in the last 10 years. Feinstein is a quack and I truthfully would take it as a selfish act to "say" she is helping Native Americans. If anything does come of it, it wont be till 2017. She probably wont even be in office. She is 82.

This issue should be before the court, not another public official, who wont do shit.

Good luck to both sides. As I have heard the native Americans are the only nationality to give "blood quantum" to prove who they are. How sad.

Didn't Feinstein's husband's firm Perini build part of Pechanga Casino? And you think she will take any of this seriously?

Of course she wont, its not even a long shot. Its a no shot. Politicians are like rats, they go where the cheese is. Native Americans are a hot topic right now.

There is nothing wrong with blood quantum it's when the corrupt leaders change then over the official BIA records of blood quantum to kick opposition out of the tribe.

When thinking about congress and the representatives both parties are not going to change the status-quo. Things like influence and money are to great on the side of the tribes. We disenrolled would need to change the playing field or to level the playing field by becoming influential, spending equal to greater amounts of money, or having something to bargain with or favors to call in. Now if we could get a whole lot of people organized and able to speak with on voice we could get some influence, but that would take millions of people. If we could get some money then we would need billions of $$$. Last we would need a lot of dirt that we could use as leverage, blackmail, these politicians. My point is not to bash the liberals or conservatives, but to make the point that it does not matter what side is in power they both are not going to do anything. I know why don't we just blame it on President Obama and call it a day.

IT'S ALL YOUR FAULT MR. PRESIDENT OBAMA, SO FIX IT ALREADY AND QUIT
MESSING WITH OUR LIFES.

I get a kick out of the Obama posts, I was being sarcastic, I just wanted to see who would bite. You do know that we have been disenrolled longer that he as been president. Also if we want it fixed we should not depend on another to fix it for us. Like I said both republicans and democrats do not care because we do not have influence, money or something on them to make them do something. I ask this what have you done to help.

I have a real question, if the casino was closed and there was no more per cap would you still want to be a part of the tribe? I think some would, but I also think there are those who will not, but will not say so. If my question pisses you off then I have to ask why? I believe if you are being truthful you will not be pissed. Or is it better to say angry or upset? I was once in favor of the casino because I believed it was going to help all Indians, boy was I a simple minded sucker. Then I could not believe that my own tribe would betray our family. I did not believe it until I opened the letter that last month in March of 2004. I know I would still be a member if it were not for the casino. It makes me sad to see they are expanding and that there is no one who cares about what is right or wrong anymore.

If there is no casino it doesn't make us less indian, it makes us poor indians.

So instead of being a poor Indian you let these leaders do as they please just so you don't have to be a poor Indian.
I guess the money has bought many of our peoples pride and Hearts.
Look at how many of our Friends and Family Members are being hurt by us being quiet.
It is us the quiet ones that are stopping Justice of these corrupt so called leaders.
I don't see any of us rushing to the meetings and demanding an audit of the finances.
What I do see is the Members of some Tribes giving their power to the evil doers to do as they please and screw our friends and family members that are being hurt.
It is us, the still enrolled that can stop all of this bullshit in it's tracts, but we are so afraid that we might become a "poor Indian"
if we help our own people.
I will say this, it won't be long until everything is all gone because we didn't speak up and demand this corruption to stop.
Every Enrolled Tribal Member needs to think about this because this is where we are headed.

The TRUE fact is exactly what you say.

We've been trying to wake the Pala tribe up for a while, but they were convinced we were lying and we just wanted our per-cap back, because it is all about the money. Well now we will see who is all about the money. We are not the ones lying to the tribe and yes the Casino can be closed, just like Nooksack and Chukchansi. When it does happen, what do you think Robert and Theresa will do? DO you think they will run with the money they have stolen? If they are not arrested, they might run, off to their compound in Ireland. It is coming. If things don't change they will get changed for you. Just ask a Chukchansi, they never thought their Casino would be closed either.

It really does pay never to give up the battle before the war is over.
I just had a conversation with a friend that lives in La Jolla on the Coast, and she advised me that Amy D. in the Regional office BIA, is in fact under investigation with her niece Sara D. and some other unmentionables.
Praise the Lord for justice.

The New Year is almost here and no changes so far in Pala.
What are you Tribal Members waiting for?
Go to the next Tribal Meeting and demand an AUDIT before the Casino gets closed up.
It is getting close to closing already.
Do all of you people love Smith and Nieto so much that you will not act on this.
You know that they are stealing from the Tribe and it seems that that's fine with you.
May be the real justice here would be to close the Casino.
And then we will see who is ok with the corruption.