Juanita Sanchez, Elder of Manuela Miranda Family of Pechanga, Walks on at 88, Without Justice.

Sad news today, to hear of the passing of the ELDER of the Manuela Miranda family, whose lives were ripped apart in the first mass disenrollment in the history of the Pechanga Band of Luiseno Indians.

In her search for justice, she opened her home to protesters, to provide sustenance, support and guidance. 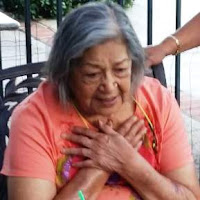 Grandson John Gomez Jr posted this on his Facebook page in her honor:


Earlier this morning, my Grams, Juanita D. Sanchez passed on. Born on June 24, 1927 at her family's ranch near San Jacinto, California, my Grams was one of ten children born to Andres and Frances Salinas.

A direct descendant of Temecula Chief Pablo Apish, Grams was a proud Payoomkawish who spent her life helping and caring for others.

Grams spent over 20 years with the California State Department of Rehabilitation as a case worker and received a commendation from the California State Legislature for her work on behalf of her clients. After retiring as a State of California employee, Grams continued to serve others by donating her time and resources to numerous charities and organizations.

A member of the Pechanga Band of Luiseno Indians until 2004, Grams worked with others who had been the victim of human and civil rights violations in Indian Country. She was preceded in her death by her parents Andres and Frances as well as her 9 brothers and sisters: Jozee, Esther, Pete, William, Michael, Myrtle, Pearl, Margaret, and Beatrice.
She leaves behind her four boys, Paul,John, Arthur, and Alfred, and a large number of grandchildren, great-grandchildren, nieces, and nephews.

Services will be held next week in Murrieta, California and Grams will be laid to rest at San Jacinto Valley Cemetery near her mother and grandmother.
Posted by OPechanga at 12:39 PM

John Gomez is a class act. Sorry for your loss Mr. Gomez. May the Creator welcome your Grams with open arms. Carry on her legacy by finding courage in your voice and letting your words be filled with grace. God Bless you and your family

So sorry, she is no longer suffering and maybe she can now help her people in a different way from the other side. May she RIP.

May Frances Miranda honor Juanita, by working to restore the Manuela Miranda descendants to their rightful place.

I am so sorry to read of Juanitas passing. Creator will greet this wonderful woman with open arms.

One of the Kindest persons we've ever known! We were so privileged to have known her. Our condolences to the Gomez family. RIP Juanita.

Just wanted to let you all know, Aunt Juanita family viewing is Wednesday at 5 pm and her rosary starts at 6:30 pm at:

Thursday mass is at 10 am