San Nicolas Island and The Wrongful Removal of Remains: A History without Pechanga, Why Would They STEAL the BONES of Gabrieleno Ancestors?

I'm receiving more information on the history of San Nicolas Island, it's relationship to Gabrieleno and it's glaring LACK of any relationship to The Pechanga Band of Luiseno Indians which proved they don't care about certain sacred sites if you can put a golf course on it .

The tribe has taken control of the bones of Gabrieleno Ancestors.   We reported on that earlier. I've included some pictures of historical works describing the Gabrieleno's cultural ties to San Nicolas Island, click on them to enlarge: 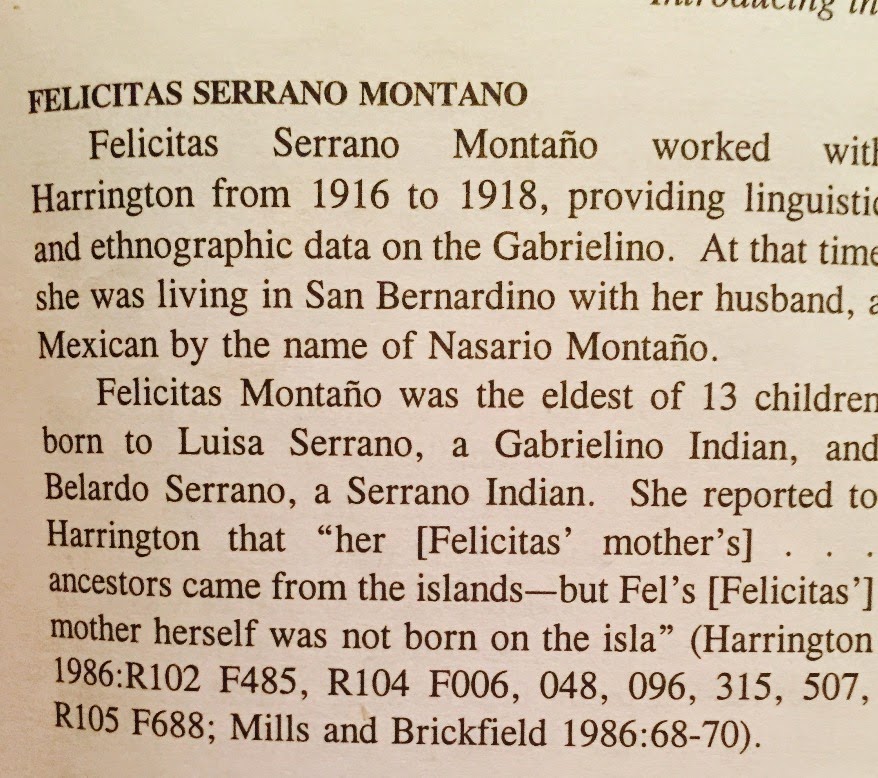 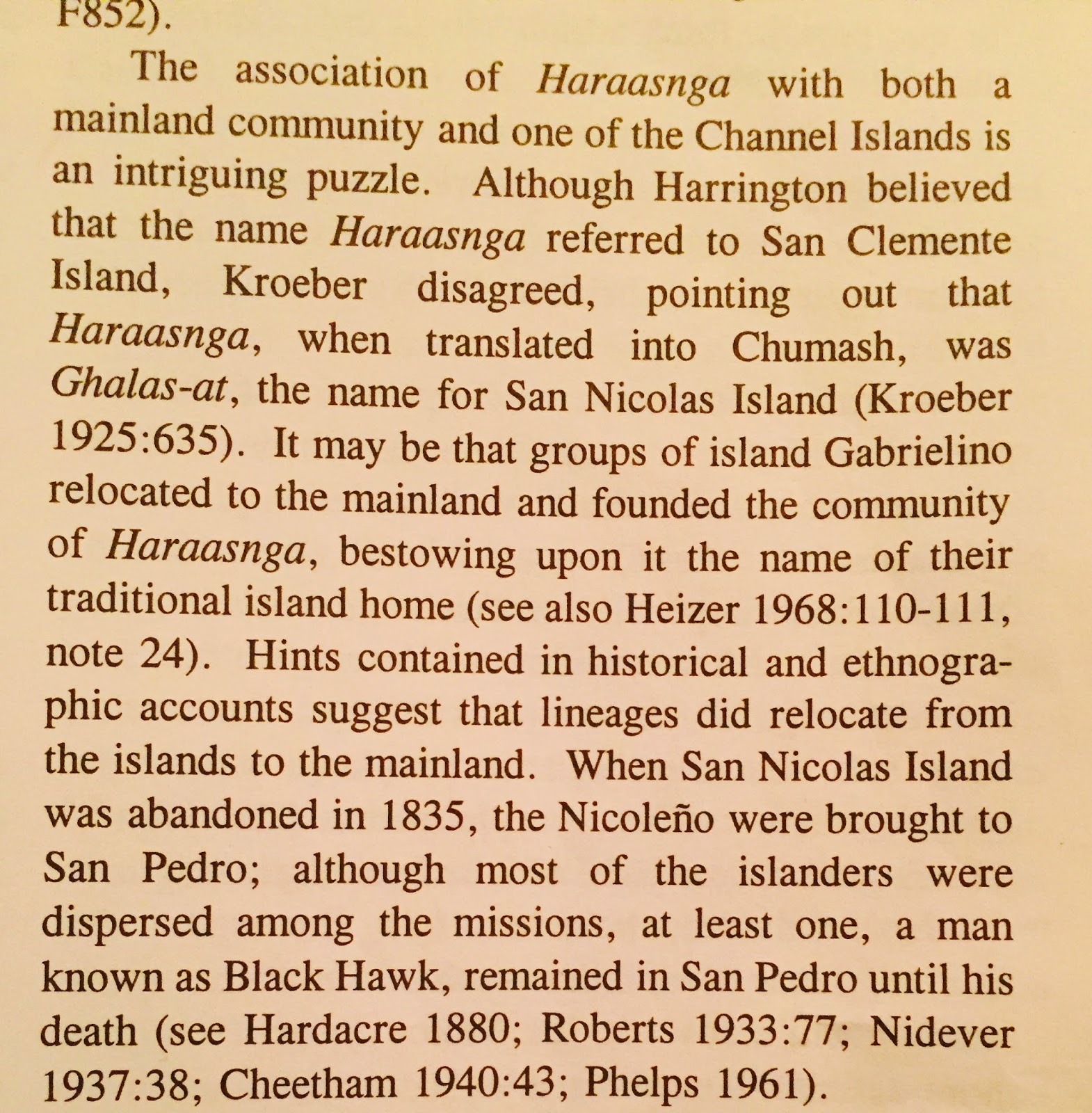 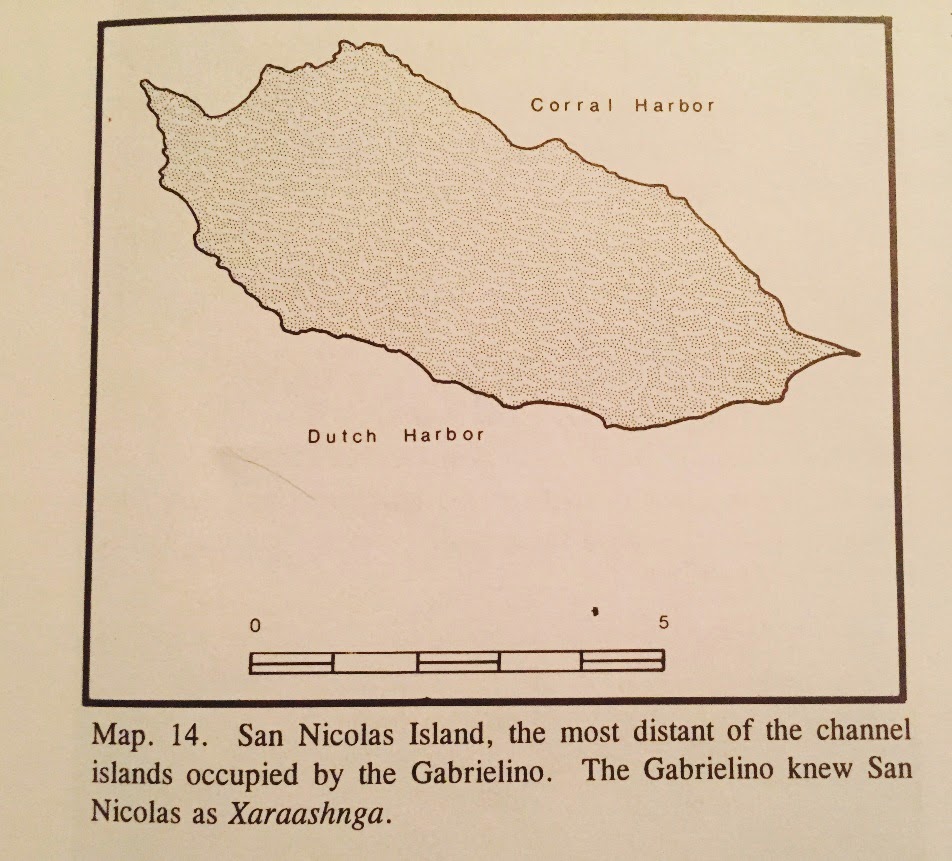 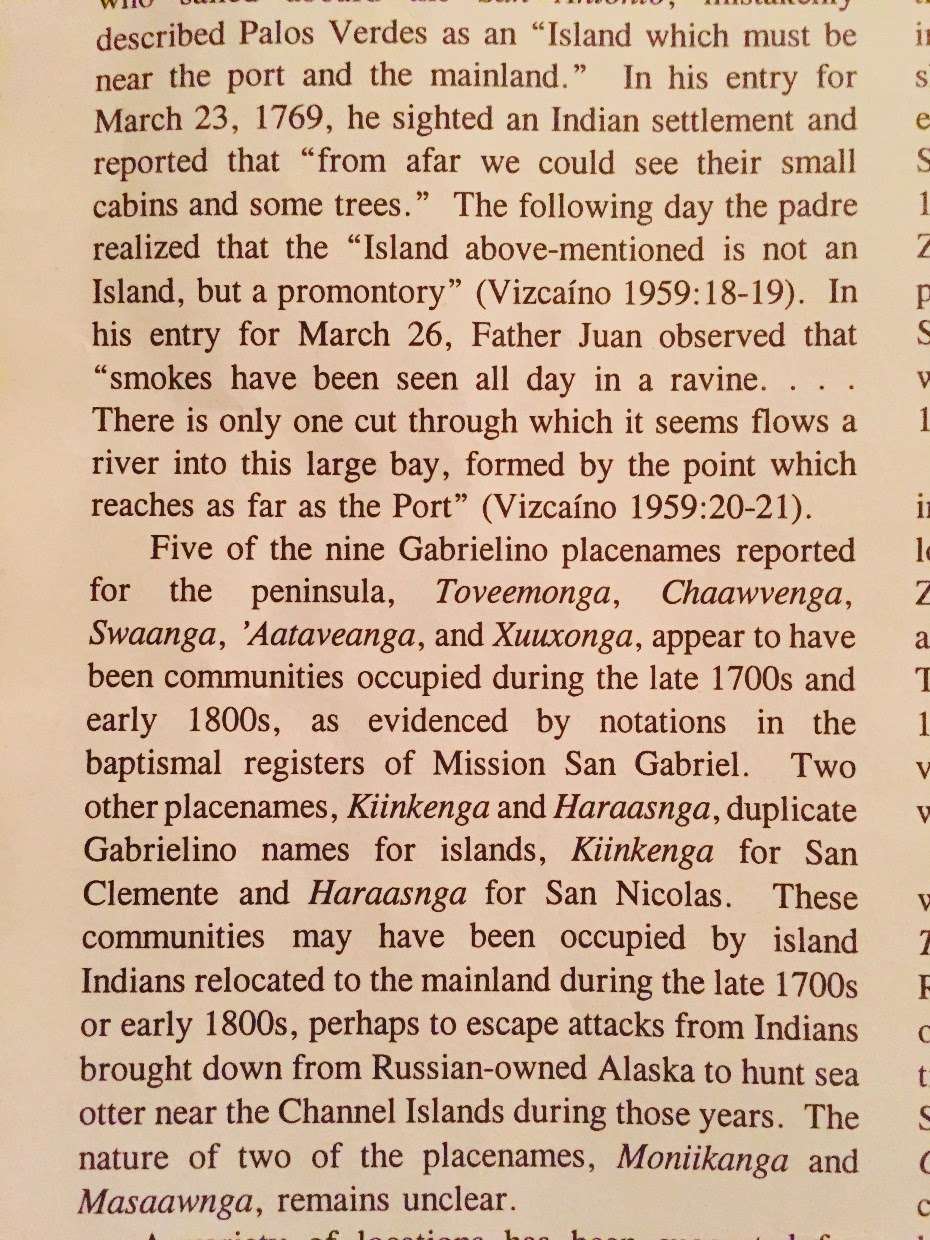 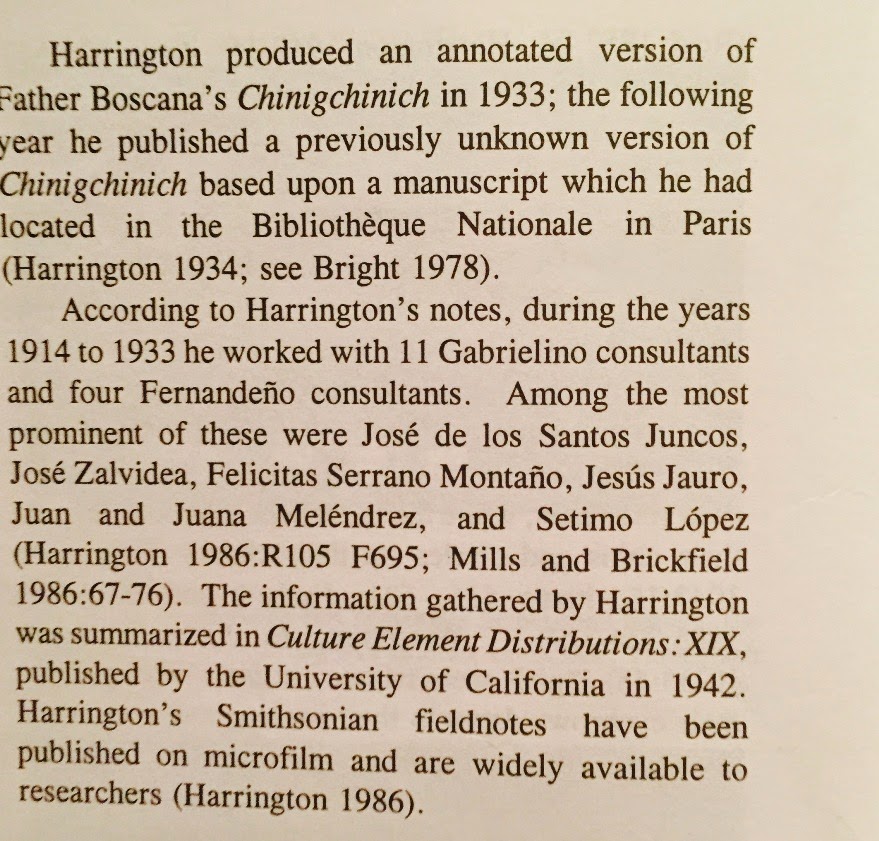 Posted by OPechanga at 6:20 PM

If Pechanga and Spokesman Macarro does not honor ALL ancestors who created the reservation and got Federal recognition. Why should they be representing caring for other Ancestors outside their band? If they can't honor ALL within they should be told to stay away until they can do the right things.

Looking at the various blogs concerning the Pachangas, where is their leadership taking them? Mocoso the pachango is setting a bad precedence for the young little braves who will be the leaders of the tribe of the future. What an insult to the entire Indian Nations thoughout this country.

The leader of the Pechanga tribe has no ancestors, that is why he is always stealing others. None of these actions are the Indian way. Pechanga tribe, the leaders and the followers are an embarrassment to themselves, the ancestors and ALL Indian Country. Honor the ancestors. We are all related.

Macarro has Sioux in his bacgroung. It's councilmember Murphy who has no Pechanga blood

Pechanga dose not respect lineage or history. He is a paper Indian. I do not believe he and the tribe have an interest in preserving history. The San Gabrielino Indians have been fighting for recognition for over two decades. They are not as split as it has been suggested. Their tribal council is working to restore their name. Pechanga has been given the bones because the tribe is not recognized. It is said that they are the custodians of the bones. It is my understanding that the tribe will be made to release the bones to the tribe if and when they are granted tribal status.

I do not believe this is the intent of Pechanga. They have in the past fought to keep this tribe and other tribes from receiving status. This and other tribes are a threat to the market share. I believe the tribe will in the future will say that these bones are really the descendants of the Luiseno people.

It hurts to hear bad things said about my Tribe. I love my Tribe and wish only goodness would follow them all the time. It is Macro and his Henchmen that have led the Tribe down this path of destruction, and made them a laughing stock. Being disenrolled hurts on many levels, I wish I still had a say in how the Tribe does things, but can only stand at the outside and watch it slowly destruct from within.

Pechanga, Macarro et al. , legal aides only want to protect some members not ALL members rights. By disrespecting Ancestors who left heirs of their rights and disenrolling them, and not following custom and tradition, and or justifying their actions under sovereignty is a disrespectful act against ALL. Not only will they have to answer this but their heirs will look at the truth and say why did you do this? Lies and misinformation can be broadcast until the Creator makes the Truth show itself. Hope the best for you.

(Macarro has Sioux in his bacgroung)

You mean he likes to sue in court or hide behind federal court or under the Judges dress.

No Murphy was Adopted in the Indian way. All eligible members at the time voted and he was accepted. Now Murphy sits in a council position and dishonors ALL heirs and allows custom and tradition to only justify his belonging, but dishonors Ancestors who created Pechanga with Federal recognition and will not see the recorded history. Pechanga Federally recognized as an allotted Indian reservation. Some allotments have Heirs who enrolled when the band made bylaws and custom and tradition policies. Then adopted people who did not meet the bylaws. Now we dishonor ALL Ancestors to disenroll heirs. Macarro, Murphy, et al History is crystal clear. Honor ALL our Ancestors.

I have read testimonies about this great spell caster called Dr. Brave how he helped people to bring their lover back. so i decide to give him a try, i am here today to give my own testimony on how this great man brought my husband and brought great joy to my family, My name is Elizabeth Williams and I'm from New York City USA,and I'm happily married to a lovely and caring husband ,with three kids. A very big problem occurred in my family seven months ago,between me and my husband .so terrible that he took the case to court for a divorce.he said that he never wanted to stay with me again,and that he didn't love me anymore.So he packed out of the house and made me and my children passed through severe pain. I tried all my possible means to get him back,after much begging,but all to no avail.and he confirmed it that he has made his decision,and he never wanted to see me again. So on one evening,as i was coming back from work,i met an old friend of mine who asked of my husband .So i explained every thing to him,so he told me that the only way i can get my husband back,is to visit a spell caster,because it has really worked for him too.So i never believed in spell,but i had no other choice,than to follow his advice. Then he gave me the email address of the spell caster whom he visited.{bravespellcaster@gmail.com}. So the next morning,i sent a mail to the address he gave to me,and the spell caster assured me that i will get my husband back the next day.What an amazing statement!! I never believed,so he spoke with me,and told me everything that i need to do. Then the next morning, So surprisingly, my husband who didn't call me for the past seven {8}months,gave me a call to inform me that he was coming back.So Amazing!! So that was how he came back that same day,with lots of love and joy,and he apologized for his mistake,and for the pain he caused me and my children. Then from that day,our relationship was now stronger than how it were before,by the help of a spell caster. So, i will advice you out there to kindly visit the same website { http://enchantedscents.tripod.com/lovespell/} and you can also reach Dr Brave through his mobile number +2348072370762,if you are in any condition like this,or you have any problem related to "bringing your ex back. So thanks to the Dr Brave for bringing back my husband ,and brought great joy to my family once again. { bravespellcaster@gmail.com }, Thanks..