Determination and Persistence Pay Off: Cherokee Native Child CAN WEAR EAGLE FEATHER to his Graduation NEVER GIVE UP

Our friend John Cornsilk relayed this story about a Cherokee Nation mother who needed support in her quest to get an eagle feather for her son's graduation from high school.  With a long wait list, she was put into contact with Cherokee Nation reseacher David Cornsilk.   David has worked in many capacities for his tribe and is also an activist who supported the Cherokee Freedmen in their recent court victories after a long struggle.

This is a story about persistence, about education of non natives and it shows that that persistence and dedication to the struggle can pay off.  It's something that all Native people who are struggling with injustice, even from their own tribe, should NEVER GIVE UP.   Please read the story in her own words:

"Osiyo & osdasvhiyei. My name is Teresa Sequichie and I am a member of the Cherokee Nation, as is my 17 y/o son.

After leaving Tahlequah we headed to a suburb right outside of Houston. My son is the only Native student in his entire school district. It's mostly white. My son is in the 11th grade. I wanted him to have an eagle feather for graduating, but the waiting list was almost 5 years long.

We were blessed enough to be put on the same path as David Cornsilk. He honored my boy with one of his own personal feathers! We had it blessed and beaded and came on back to TX.

In the meantime I spoke to my son's high school principal who told me no way, and backed that up by showing me the student handbook that I'd signed stating "no adornment on the graduation cap or gown".

I went back to the only person that seemed to care... David. He composed a letter to the school explaining the significance of the eagle feather in the Cherokee culture. I felt empowered & with my letter in hand I went above his head and went to the superintendent of the district. I was immediately discouraged when the 1st thing he said was, " we've never ran into this kind of problem before".

He called David & asked a ton of ?'s. Then he wanted to see the exact feather. I told him I couldn't let him hold the feather but I could send him pictures. For weeks he went back & forth asking ?'s and trying to make a "deal" with me. Finally he made the decision-our request was denied. But he offered that he would allow him to wear the feather underneath his robe!!

Again I'm running back to David. At this point I'm not sure what I'm expecting from him, as he'd already done so much, but he would encourage me to keep fighting and not to take no for an answer.
And he let me know that it was my place to educate them & make them understand our ways.

So feeling newly inspired I walked right into the middle of the district school board meeting! They let me speak for exactly 45 seconds. I tried my best to squeeze my most important facts into that minute and a half but they acted like I wanted my son to ride in on a mountain lion or something.

They took a private vote and informed me for a THIRD time the answer was no to him wearing his eagle feather. We were devastated. We went back to Tahlequah for a week and today the principal sent this letter home with my son stating that after extensive research by their legal dept they've decided to approve the "regalia" 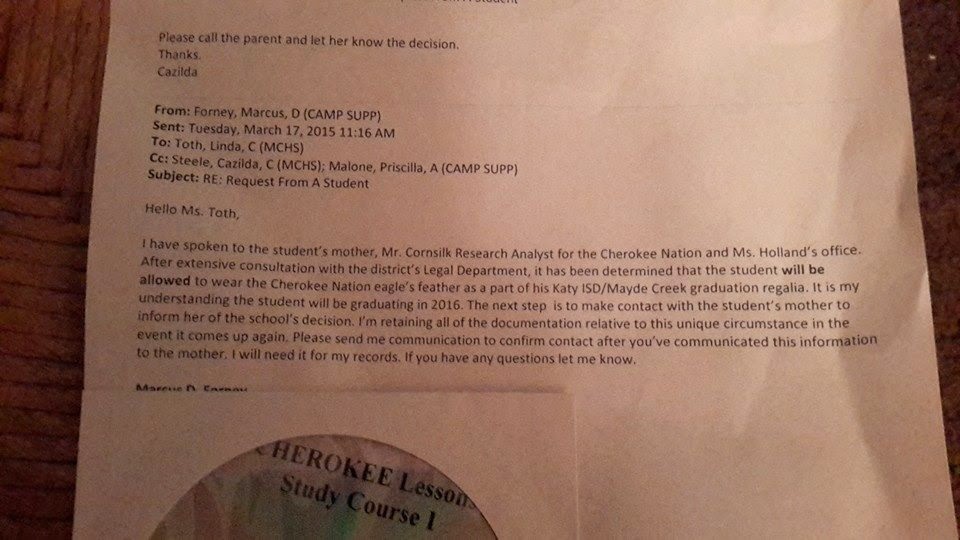 I thank you more than you know, David Cornsilk. You inspired me and you will never be forgotten for everything you've done for my family. You truly went above and beyond!!! Wado a thousand times!!

And thank you for caring about our Native youth."
Posted by OPechanga at 8:58 AM

Great story....good for the Cherokee..