This week brought one of the most shameful acts by a sitting Senator. Dianne Feinstein released a $40 million dollar report on the CIA's abuse of terrorists who masterminded the death of 3,000 of our citizens. Whichever political stripe you are, you have to agree that NOT interviewing the subject of your "report", the CIA, who were involved, means that you don't want the TRUTH, you simply want to score political points before your power wanes.  Coincidentally, she did not speak to Pechanga allottees BEFORE sponsoring a bill that would strip us of our water rights for our reservation land.

We see it this way: She exposes abuse of our mortal enemies but does nothing about abuse of Native Americans by fraudulently enrolled tribal members. California is HER STATE, we are HER people yet she is IDLE SOME MORE when it comes to protecting the civil and human rights of thousands of Native Americans who have been stripped of their citizenship. 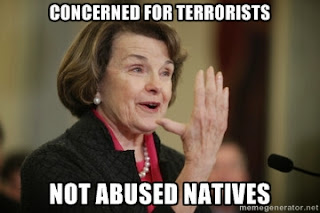 There is NO way that Senator Feinstein or Senator Boxer can claim they don't know what's going on. Laura Wass with AIM has been working with Boxer for a decade, and I have met with Boxer's legislative analysts to let them know what's happening...believe me...THEY KNEW. And I've had phone conversations with Senator Feinstein legislative analyst and THEY KNOW. They just DON'T CARE. If it's NOT financially going to hurt the BANKS, they don't care if it hurts THOUSANDS of Native American in CALIFORNIA or other states.

Protecting Native Americans from abusive tribal councils, enforcing the Indian Civil Rights act, and STOPPING the civil and human rights abuses here in the United States of America seems a better legacy, than being know for giving aid and comfort to our enemies for political gain.

Posted by OPechanga at 2:12 PM

she isn't going to do "SHIT" because her husband is the one that gets most of the contracts to build the Indian casino.s.