Two Year Anniversary of Pechanga's Beating of Customer at Casino

It's been two years since Richard Swan was brutaly roughed up and slammed to the ground by Pechanga Resort and Casino security guards. The recovery was long, but glad to report that Richard is doing much better now. Wife Jonne reports they are visiting other casinos, but won't talk about what happened.

We just like to remind people to be wary of the rights they don't have when stepping on tribal land. We keep this story linked on the sidebar so that people can see what happened.

UPDATE III: Looks like Pechanga will pay for part of Richard Swan's medical coverage. Pechanga has fired ONE of the security guards involved. Pechanga is saying that the Swans escalated a "minor incident" which is total b.s. And the Riverside District Attorney is still "reviewing the case" of battery against the FIRED Pechanga security guard. I think the guard should come forward to Mary Parks of KNBC and tell the story of Pechanga's actions and how they treat their customers. It may help sway the DA from pressing charges or at least plea bargaining them out.

UPDATE II: MARY PARKS of KNBC has done a story on the Swans! Please leave a comment there.

UPDATE: GREAT NEWS! The Swan Family contacted me and let me know that they will be interviewed by the news tomorrow. That will be the first, hopefully of many. WHERE is the Press Enterprise?

An elderly Palm Desert man, with a pacemaker, who was patronizing the Pechanga Casino was beaten by Pechanga security and his wife terrorized. This is NOT the first incident of this type at Pechanga, according to what the RCSD told the Swan's. The Riverside Sheriff's Department has take a report on the incident.

Seniors should rethink visiting Pechanga. You have LESS rights at a tribal casino and the sheriff's may not be able to protect you. One of our family was attacked by a former tribal council member and he ran like a 'punk-assed bitch' to the Government Center so the Sheriff's couldn't touch him.

Is Pechanga safe? The stories of thug like behavior and the recent car-jacking by a Pechanga crime family member AT THE CASINO should point to a NO response.
Here is the description of the incident and a picture:
On October 20th, 2008, I nearly lost my life. While in the Pechanga Casino Resort in Temecula, my wife and I had a disagreement with Security personnel over forty-four dollars left in a machine by a patron, who was harassing her. My wife was scared, so I got upset.

Security told my wife she could stay but I had to leave. We told them we'd both leave and started walking toward the hotel to get our luggage.
Suddenly without warning I was jumped from behind by two security men and violently thrown to the ground. I kept telling them to stop, that I was a 70 year old man with a pacemaker and took a blood thinning prescription Coumadin. But they didn't care. 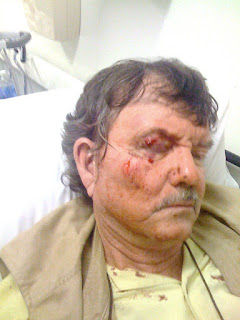 They slammed my head into the marble floor and dragged me to their security room. I feared for my life knowing that the Coumadin I am taking could cause severe bleeding. If I bled internally or developed a clot in my head I'd be dead. By the grace of God I survived.

I had trouble breathing so the casino medical team gave me oxygen. Seeing my condition they rushed me in an ambulance to the nearest hospital. I have low blood pressure but it stood at 183 over 100. The Sheriff came to the hospital and took our report.
My wife spoke to Capt. Carmichael at Pechanga and he told her that normal procedure was to escort someone who is told to leave out the nearest entrance or ask if they were hotel guests and then escort them to their room to get their luggage. None of this was communicated to us.We intend to file Assault and Battery charges. According to the police and local attorneys, this kind of brutality goes on all the time in certain reservation land casinos.
Isn't anybody going to do something about it? One day, those Security men, who have their own rules, will kill someone.

Teetilawuncha's Blog has a story about YOUR RIGHTS in Indian Country.
Posted by OPechanga at 12:15 PM

There should be a sign above the casino in big letters stating these facts:
You are entering a Sovereign Tribes Reservation and if you get hurt, attacked, molested or killed on our grounds, it is your problem not ours.
We, the Pechanga Tribe, do not care about your civil or human rights.
We will treat you like crap and then lie about everything, that's the NEW CORRUPT PECHANGA WAY.

What a sad tribe they have become.

I think you have zero proof and it's clear from the tone of your blog you have anger issues. I would submit that the police and the news have no interest in your story because its generated by someone who clearly has it out for Pechanga.