Indigenous People's Day is NOW A THING Thanks to President Joe Biden. Still Honoring Columbus, However. 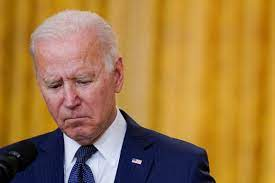 After continues failures for his administration, a glimmer of brightness as President Joe Biden on Friday issued the first-ever presidential proclamation of Indigenous Peoples’ Day, lending the most significant boost yet to efforts to refocus the federal holiday celebrating Christopher Columbus toward an appreciation of Native peoples.   Los Angeles had joined other cities in renaming the holiday years before.The day will be observed Oct. 11, along with Columbus Day, which is established by Congress. While Native Americans have campaigned for years for local and national days in recognition of the country's indigenous peoples, Biden's announcement appeared to catch many by surprise.

“This was completely unexpected. Even though we've been talking about it and wanting it for so long," said Hillary Kempenich, an artist and member of the Turtle Mountain Band of Chippewa. In 2019, she and other tribal members successfully campaigned for her town of Grand Forks, N.D., to replace Columbus Day with a day recognizing Native peoples.

“I'm kind of overwhelmed with joy,” said Kempenich. She was waiting Friday afternoon for her eighth-grade daughter, who grew up challenging teachers' depictions of Columbus, to come home from school so Kempenich could share the news.

“For generations, Federal policies systematically sought to assimilate and displace Native people and eradicate Native cultures,” Biden wrote in the Indigenous Peoples’ Day proclamation. “Today, we recognize Indigenous peoples’ resilience and strength as well as the immeasurable positive impact that they have made on every aspect of American society.”

In a separate proclamation on Columbus Day, Biden praised the role of Italian Americans in U.S. society, but also referenced the violence and harm Columbus and other explorers of the age brought about on the Americas.

Posted by OPechanga at 4:06 PM

So Black People get a month to celebrate their culture and heritage.

Hispanic People get a month to celebrate their culture and heritage.

LBTGQ get a month to celebrate.

American Indians get a day.

Just shows how the value system operates in the US.