For decades, the National Congress of American Indians has purported to advocate for Native Americans. Decades of good  works can be injured by missteps.  I feel that time has come with the selection of Pechanga Band of Luiseno Indians chairman Mark Macarro to their board.

Tribal disenrollment has been a stain on the morality of Indian Country, or to be more precise, casino Indian country. I have been detailing the issues of that disgraceful action, stripping the tribal citizenship from those who rightly belong for 14 years on this blog.  I have never been more ashamed and disgusted with this election. 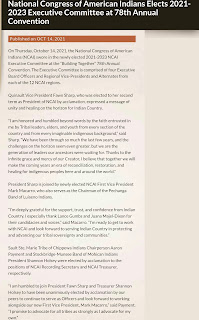 What makes an organization elect someone without vetting them? Mark Macarro has lied to Congress, abused our ancestors, destroyed the heritage of our children denied civil nd human rights, runs an apartheid system, segregates reservation residents including alottees who have lived there for their entire lives.  He speaks with the tone of a cheater, but is he looks good in a bolo tie and donates to his lobbyist wife with tribal money he is a good choice

You have made a poor choice NCAI, unless your goal is to continue your decades long policy of nor protecting and supporting the over 11,000 Native American Indians harmed via Disenrollment.

Posted by OPechanga at 6:06 AM

If Mr. Maccarro only knew how much money is robbed from Pechanga he would, Oh yeah he don't give a fuck. WE can steal $5,000 a week and nobody blinks an eye. Thank you Mr. Maccarro. God Bless you Aho!