Tribal Sovereignty = Tribal Justice Is NOT ALWAYS FAIR or Just

Pechanga had families on the disenrollment committee that were part of a group that tried to split up the tribe rule on families they publicly admitted they wanted out of the tribe.   Fair, or not fair?  Why give a tribe that mistreats their people the reward of Billions of dollars? 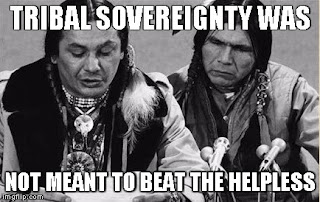