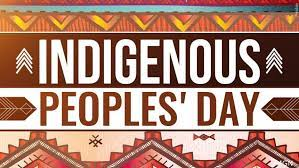 I AM FOR INDIGENOUS PEOPLE'S DAY replacing Columbus Day.  If you want to celebrate Italians, celebrate Chef Boyardee, who did MORE for America.

In 2017, the city of Los Angeles voted to drop Columbus Day. It drew a lot of comment during that meeting. Some commenters claimed Italians did a lot for this country, uh,  including bringing spaghetti. Let me say, I love Italians, and spaghetti.

But this issue is much different than it being anti-Italian.   Arguments against Columbus:

Columbus supervised the selling of native girls into sexual slavery. Young girls of the ages 9 to 10 were the most desired by his men. In 1500, Columbus casually wrote about it in his log. He said: "A hundred castellanoes are as easily obtained for a woman as for a farm, and it is very general and there are plenty of dealers who go about looking for girls; those from nine to ten are now in demand."He forced these peaceful natives work in his gold mines until they died of exhaustion. If an "Indian" worker did not deliver his full quota of gold dust by Columbus' deadline, soldiers would cut off the man's hands and tie them around his neck to send a message.  Slavery was so intolerable for these sweet, gentle island people that at one point, 100 of them committed mass suicide.Catholic law forbade the enslavement of Christians, but Columbus solved this problem. He simply refused to baptize the native people of Hispaniola.Arguments FOR Columbus DayColumbus Day was Italian Americans' idea, and many of them want to keep itAfter strong lobbying from the Knights of Columbus, a Catholic service organization consisting largely of Italian Americans, President Franklin D. Roosevelt proclaimed Oct. 12, 1937, as the first Columbus Day and “directed that flags be displayed on all government buildings on that date,” according to a front page item in the Los Angeles Times that September.Is Cultural Diversity enough to keep celebrating a slaver who NEVER set foot in North America, much less Los Angeles or any other city in the United States?
He didn't prove the world was round, and the crew he left behind after a ship ran aground were all dead before he came back.Indigenous people were here when the Spanish came to California. They weren't discovered, except by those who didn't know they were here.
What SAY YOU?
Posted by OPechanga at 9:05 AM