JOE BIDEN BALKING at Choosing Rep. Deb Haaland for Interior. Afraid She Might Go OFF THE RESERVATION? 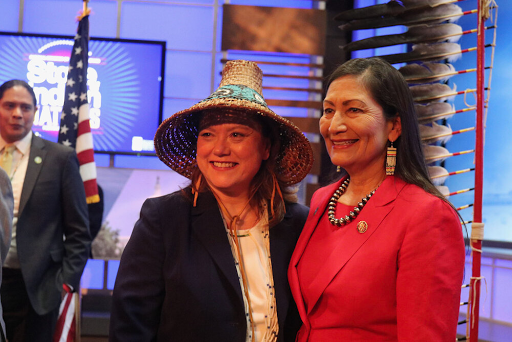 
According to this Huffpo article, some of Biden’s advisers have begun anonymously planting the idea in news stories that the Native American congresswoman, Deb Haaland, who chairs a House subcommittee with oversight of the Interior Department, is not qualified. (OP: Oh, like Xavier Becerra is qualified for HHS?)
What’s also puzzling is that these sources say a better candidate is a lesser-known man who is also Native, Michael Connor, despite dozens of tribal leaders telling Biden, publicly and privately, that they back Haaland.  Does Biden have "enough women" to satisfy his minority numbers?

We wrote about Rep. Haaland's support last month here   And as a site on tribal disenrollment, she's on record about the issue, thanks to Cam Foreman, a disenrolled Native American from the Redding Rancheria.

HAS JOE Biden made ENOUGH HISTORY by choosing a Black woman as VP that he doesn't need to make more with a Native American woman in charge of Native American issues?   What do you think?

Meanwhile, groups in New Mexico are still sending letters to Biden backing Haaland. On Saturday, 50 Indigenous, environmental and social justice organizations in the state wrote to Biden saying Haaland is “uniquely qualified” to be interior secretary. This was a day after the All Pueblo Council of Governors formally urged Biden to nominate Haaland, and two weeks after the Eight Northern Indian Pueblos Council wrote a similar letter.
Posted by OPechanga at 11:48 AM