On Tribal Disenrollments and the Beginning of the End of Sovereignty 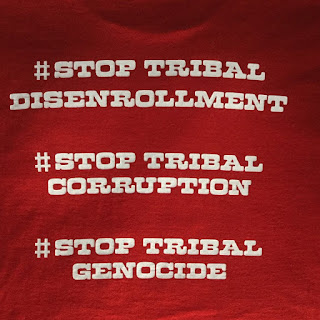 In the 21st .Century, who would have thought that the Indian Wars would begin anew? This is not the war of racist whites who wanted to move west no matter who was hurt. This time, it's greedy Indians who want more power and more money, no matter which tribal members they hurt. The 21st century Indian War is now Indian vs. Indian. Tribes such as Pechanga Band of Luiseno Indiansof Temecula, Redding Rancheria, Jamul of San Diego, Enterprise Rancheria (OP:Which recently brought some members and ancestors back) are violating their members civil rights, eliminating them from tribal rolls and denying them their part of the tribe. Over ELEVEN THOUSAND Indians have had their citizenship stripped

And because of California Tribe's use of sovereignty, it can be "we just don't like you" or "we don't believe the evidence" (are you going to believe me or your lying eyes?), In California's Indian Country, wealthy casino tribes are gorging themselves with cash, the fruits of their casino, thanks to laws passed by the citizens of California. Prop 1A and Prop. 5 were passed overwhelmingly, thanks to ads that promised not to expand gaming and to help tribes with self reliance. Was abusing their people's rights what they meant by that?

To the California populace, this meant that tribes would be able to take care of their own membership. Those living in poverty would be brought forth; non gaming tribes would benefit from a fund that gaming tribes would contribute to. A 'lifting of all boats' if you will. What has happened in that time has in fact helped some tribes. San Manuel of San Bernardino has developed their reservation from dirt poor to one of the wealthiest in the state and tribal members are definitely in the top 1/10th of income earners in California. And they are taking care of their people. Their population is limited, with fewer than 200 members. Morongo of Cabazon is another example of good governing. Sadly, some tribes could not stand to share their good fortune. Visions of more money, or living at San Manuel standards blinded some with greed and envy. The Pechanga Band of Luiseno Mission Indians is one such tribe. Blessed with an excellent location near a freeway and with easy access and a growing population, the Pechanga Resort and Casino was successful and thriving.

With just over 1,000 adult members, the tribe was, by 2004 able to provide their members with a monthly per capita check of $15,000 and quarterly bonuses. Additionally, the tribe provided health care via Blue Shield, Dental, Eye and extra benefits for elders. Also included was educational assistance including college scholarships for which all was needed was a C average. Even John Kerry and G. W. Bush could have kept a scholarship.

But that wasn't enough for a splinter group of band members, the Concerned Pechanga People. This group of extremists made threatening advances on tribal enrollment committee members, storming offices demanding that people be disenrolled. The disenrollment process was initiated in a Salem-witch-trial like atmosphere. Letters saying, "I think that family should be investigated" and "there is a person from OHIO that had the same name, we think it was their ancestor. Never mind that one of the ancestors under investigation had land on the reservation for well over 100 years, given to them from President McKinley. The process has been recounted in the article from Harpers "A Paper Trail of Tears" detailing the ouster of the family of the original headman of the Pechangas, Pablo Apis. The evidence for Paulina Hunter's family is detailed in "Without a Tribe" an investigative report from KNBC-TV in Los Angeles. The investigation went on for months and as recounted in the piece, Pechanga refused to speak to KNBC until the day before the airing.

Comically, Pechanga had to buy a 30 second spot during February sweeps (a bit more costly) to tell their story. In watching the report, it was clear that Pechanga Chairman Mark Macarro was caught in a lie, and he was called on it by anchor Colleen Williams. The report featured noted anthropologist, Dr. John Johnson, curator of the Natural History Museum in Santa Barbara, and an expert in his field, possibly without equal. What is the significance of Dr. Johnson? Well, the Pechanga tribe hired him to research Paulina Hunter's ancestry. They went for the best and he found the truth about Paulina; she was indeed Pechanga, "100%" he said. Now keep in mind that this gentlemen has worked with California Mission Indians for decades, heavily researching Las Padrones, the historical record of the priests of Mission San Luis Rey (from which Luiseno comes)
Some authors, who are concerned that sovereignty issues outweigh any damage to families of disenrolled, ask the question: Are they violating tribal law or US law, because US law wouldn't apply to a sovereign nation. Well the answer is: They are violating tribal law. Pechanga's constitution requires open enrollment every January with specific requirements for enrollment. There is no blood quantum required; the requirement is lineal descent from an original Pechanga person.

Pechanga has a moratorium in place which has kept new members from joining the tribe. The moratorium is not authorized in the constitution. There was a petition brought forth to the tribe, it was ruled valid and voted upon. The moratorium, unconstitutionally, was passed. The Tribal Council explained that "the people have spoken" and it's now law until repealed. Later, when a petition was brought forth to end all disenrollment, it was ruled valid and voted upon, after the question of the Hunter family's disenrollment process was brought up, Chairman Macarro said, "all means all".
The people voted to end all disenrollments. The will of the people was spoken. Months later, the tribe was sent a letter saying that the Hunter family disenrollment couldn't be stopped by a vote of the people; they had to right to vote on enrollment matters. Okay so the people had a right to STOP new members coming in, but not to stop lifelong members from going out?   I think this answers the question of violations of law.
This is sovereignty that is wielded like a club, to beat down the weak, not for the good of the members, but to their detriment.   These websites and blogs can help answer questions, and there will be more articles like this one

Posted by OPechanga at 8:41 AM

To the above, I personally understand the anger but seek some help if this is a normal thought. I’ve been disenrolled for over 15 years now but I managed to carry on with life as life doesn’t stop. Most don’t become Truly successful as a tribal member. Money made many in my tribe and family lazy. Lots of family members seem to still be where they were when they were disenrolled, nowhere. They plead and pray for things to go back how they were while they don’t continue to pursue normal work or school all the while they’ve become more unstable and poor. We only have one life, don’t let this corruption allow your life to pass bye. Go live your life.

It's hard to take commenters like the first one seriously. With little effort at anything beneficial, being just a loudmouth for the sake of hearing their own voice will solve nothing....

I'm not condoning the act of violence, but if we cannot be compassionate to those who have actually experienced the injustices of Disenrollment or any tribal corruption, acts that leave the victims with nowhere to go, get no justice, harming our most loved ones, etc, then what is the point to creating a safe space for us to express our hurt and pain? Why are we going to allow anyone to silence us even more?

From my personal experience of being disenrolled, I've never had the support or compassion from any member of AIM. Even when I reached out to a few in the area, they seemed they couldn't get involved in Indian vs Indian crimes and chose to ignore us. But as soon as the next media sensation happened, they were all over it.

As a disenrollee, I choose to stand in solidarity with the victims of these injustices and I choose to not silence them, but to show them love and compassion in their, our, darkened lenses.

Choose otherwise, but to silence and censor them is another great injustice.

I think it's a bit hypocritical to say you don't/never advocate violence when you're associating yourself with AIM.There is a lot of historical violent blunders attached to the group as a whole.

From our knowledge, Laura Wass is not native.

for all nations said...

my heart is hurt from this commentary...truly, violence is not the answer in regard to all our common quest to #StopDisenrollment...and, for the record, laura wass has done more to work to bring justice to those disenrolled in indian country over the last two decades than anyone i know...she deserves nothing but respect and honor for her dedication to helping people throughout indian country, and she has that from anyone who truly knows her...good day and good medicine...cathy l cory, chukchansi, disenrolled from picayune rancheria of the chukchansi indians in october 2006

I think its both hypocritical and hurtful to call out those that help Natives, behind the mask of anonymity.
What have YOU done, more than those that put their names out there, work to better our community?
.
I have stood with Laura, did I stand with you who defame and complain?

@ 3:14 PM
What in the hell do call what Tribal Leaders are doing Tribal Members by disenrolling them because of greed and corruption.
Taking everything possible from them, there homes, there income, there health care and most importantly there right to belong.
If this is not considered a form of violence
then what is this fight all about.
And who' side are you really on.
Kicking elders out of there homes, man handling kid at the Tribal Schools and telling them that they don't belong and can not attend the Tribal School any longer.
That is also a form of violence.
Telling the Elderly that they can not drink from the fountains at the parks is also a form of violence, keeping you from visiting your your family members living on the reservation and not letting you be buried in the Tribal Cemetery along side of your parents and other family members is also a form of violence.
I happen to love my Tribal background however i also love my family and when they are targets of abuse by anyone i will defend them in any manner i can especially against corrupt leaders who don't even have the right to enrolled in the Tribe in the first place.

I think that the first comment that has been removed may be on to something.
Why was it removed.
It was this persons feelings and not a request to form a group to start a move of violence against anyone.
It was an expression of his/her feelings.
I thought that that was what this site was for.
But it looks like i was wrong because if someone complains from the other side they will take down your comment.

Maybe this blog belongs to Mark "Sissy" Macarro after all.