Disenrollment for GREED and POWER, At Pechanga The Theft of Per Capita is nearing ONE BILLION DOLLARS

STILL THINK That TRIBAL DISENROLLMENT IS NOT ABOUT THE MONEY? 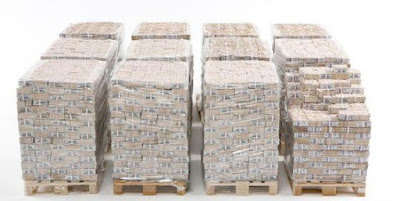 Since 2006, the year of our disenrollment, the Hunter family has lost $3,484,000 per person, in per capita payments alone. We arrived at that figure by taking the last full year of per capita $268,000/12 months ($22,333) and multiplying that loss times 156 months of disenrollment (13 years). 95 adults at the time of disenrollment equals:  $330,975,000 The Apis/Manuela Miranda family was disenrolled two years prior in 2004. The per capita at that time was slightly less, about $17,000 per month times 180 months of termination: $3,060,000 multiply by 135 adults equals:  $413,100,000 Add some NOW, for the 100 or so children who would have reached the age of majority and you are looking at another $100 million in per capita and benefits. Moratorium People NEVER shared in what was rightfully theirs. In fact, Pechanga's Enrollment Committee worked hard to KEEP them from their rightful place, so as not to reduce the per capita.  Think of this, HAD the Tosobol descendants alone been  included, 80 who may have reduced the first six years of per capita to say $140,000 total. That's an additional $200+ MILLION..
ADD those numbers up and it's nearly ONE BILLION at Pechanga alone The per capita at Pechanga went up to $360,000 per year for those remaining after elimination of 25% of Pechanga’s tribal citizens, and varies now with children maturing into adulthood.

With Mark Macarro not being opposed at tribal chairman, he's consolidated his power and can spend unchecked.. so it's not JUST about the money.....

I have old data on other tribes disenrolled's losses here  so, for you to bellieve it's not about the money, you have to be blind.  To think it's just about correcting tribal rolls, is laughable as long as there are PROVABLE tribal members still enrolled in tribes.

Email ThisBlogThis!Share to TwitterShare to FacebookShare to Pinterest
Labels: Pechanga Band of Luiseno Indians, per capita