Disenrollments at Omaha Tribe of Nebraska, Certainly NOT EQUAL JUSTICE UNDER LAW

We are learning more about the recent tribal disenrollments at the Omaha Tribe of Nebraska.  It's about dual citizenship and it's not unusual for tribes to have rules against that.  Our tribe, the Pechanga Band of Luiseno Indians also has that rule in the constitution.

I wanted to learn more about these because you have wonder what the motives were in this case of Taylor Keen and  Marisa Miakonda Cummings have been disenrolled because of dual citizenship, in Keen's case and because of a change of blood quantum for Marisa's great grandfather.  In what must be an AMAZING coincidence, the tribe made the blood quantum adjustment AFTER she worked with the FBI, under subpoena, providing financial documents that lead to 7 council members and employees pleading guilty to misusing federal money to provide themselves bonuses.

15 other Omaha tribal members HAVE NOT suffered the same fate, although they are in the same situation and the tribe knows this.   Selective enforcement of the dual citizenship issue leads us to believe it's some other reason.

If the tribe doesn't hold everyone to it's laws, it must mean their enforcement of their laws are arbitrary and capricious.  How can you claim your laws are JUST, yet not hold all the the same standards as Keen and Cummings?

In speaking to Taylor Keen, I learned there was no due process in the disenrollment, he was simply told he was disenrolled.   This letter to the tribe tries to assuage fear of 'mass disenrollment' which seems to mean those others who have dual citizenship aren't being disenrolled, but the tribe can do it at any time.

If the disenrollment is JUST, why haven't all involved seen the paperwork, and been given an opportunity to CHOOSE whether to stay in the tribe? In Taylor Keen's case, he was OMAHA FIRST.  Shouldn't he be counted as OMAHA and be required to end his Cherokee Nation citizenship? 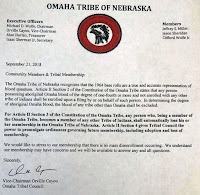 What caused this?  Was it a power issue?  Keen seems to think so.

After taking over as Chairman of the Board, Blackbird Bend Corporation by the Omaha Tribal Council, he resurrected tribal gaming after a corruption scandal led to convictions of some, and escape from justice for others.

Chairman Wolfe and Vice Chair Cayou seem to be leading all this.  What are they trying to hide?  Is it worth letting one of their most educated members go?

Here's a snippet to the story, but read the full article here of the nearly $400,000 theft from last year.   Makes you wonder why these thieves aren't being disenrolled, right?

Maybe the tribal members should keep a close eye on the thieves and not arbitrarily abuse their laws.  You remember when some of their leaders were caught stealing in 2014:

Amen Sheridan and Julia Whiteskunk, were indicted on federal charges of theft of tribal funds.  Federal prosecutors said Sheridan and Whiteskunk also moved more than $50,000 in restricted housing funds into an account in the name of the Omaha Tribe of Nebraska Pow Wow Committee. Sheridan was issued a $30,000 check from the powwow account, according to court documents.   Read more

They certainly cannot claim the tribe is doing the right thing on dual citzenship, when only 10% of those having it, are being disenrolled.  15 others are waiting for the guillotine to fal.

I'd advise staying away from their casino.  If they will cheat and screw over their own, they  will do the same to their customer...

Posted by OPechanga at 9:08 PM