Edward Robert "Bob"  Foreman, the first Chairman of the Redding Rancheria, passed away TEN YEARS ago,  on Wednesday, Nov. 19, 2008.  Here is a remembrance of a post we wrote then  Please, read and share on social media.   And AVOID the WIN-RIVER Casino. 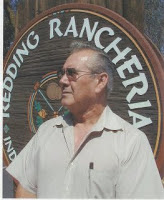 Here's how the first Chairman was treated by the Redding Tribal Council:


On January 27, 2004, all 76 members of my family the “Foremans” were removed from the Redding Rancheria tribal rolls based on nothing more than a conjured up rumor alleging my mother Lorena Foreman-Butler was not the daughter of her mother Virginia Timmons, one of Redding Rancheria’s 17 Original Distributees.
Tribal Officials never produced a single piece of evidence to dispute my mother's maternal lineage and my family provided reams of legal and contemporary documents proving her mother was Virginia Timmons. Tribal Council still required my family to provide genomic DNA from my deceased mother and grandmother to retain our tribal citizenship

Despite my family providing Tribal Council with DNA test results from two separate labs of 99.987% and 99.890%, proving by the legal standards established by the American Bar Association and the American Medical Associations that Lorena Butler and Virginia Timmons were mother and daughter, Tribal Council still stripped my family of our tribal citizenship.
Bob Foreman has been fighting to regain his family's civil rights and the rights of disenfranchised Native Americans since.

A decade after his death, one of his daughters, Carla Foreman Maslin says:
It is very difficult I know. We all have to face this very sad reality in our lives. The only thing that I have a hard time with my Father's death is that he died with injustice. I still struggle with this.

How can I move forward in my life when this still feels like a knife in my heart? And my family's heart? They say to not stay in the past. But the truth is, the past is the key to the future.

Especially when it comes to our heritage & where we come from. The origin of each of us. It reaches back to the roots of our ancestors & continues through the trunk & extends out to the branches of the future of our family. To some people that is one of the most important & sacred things in our lives. It is an organic law above all other written laws.

I grew up knowing my family & my history. The stories that have been shared & passed down are also very much apart of what makes us who we are & our identity. There is a lot of pain, tragedy, humor, & love in those stories. And DNA is the scientific proof & the glue that forever binds us. Anyways, my heart is aching today because I miss my Dad. And to all the broken hearts out there, there is no glue that that repair it. My broken heart goes out to you during this difficult time.


Here's a link to his story: BOB FOREMAN Rest in Peace Details on the celebration of his life to follow
From his Obituary:
Bob Foreman, Redding Rancheria's first tribal chairman and a pioneer in north state American Indian health clinics, died Wednesday after a long illness. He was 72.
An Achumawi Pit River Indian, Foreman was remembered Thursday by friends and family as a tireless advocate for Indian rights, skilled communicator and loyal patriarch.
He was born June 12, 1936, in Lake County. A veteran of the U.S. Navy, he worked in construction as did his father, said daughter Carla Maslin of Redding. In the late 1960s, he began his campaign to get Indians health care in the north state.
His efforts paid off in 1971, with the opening of the federally financed Shasta-Trinity-Siskiyou Rural Indian Health Center in Anderson.


"Bobby was a real devoted guy to his tribe," said Everett Freeman, tribal chairman of the Paskenta Band of Nomlaki Indians near Corning. "He almost single-handedly got Indian health to where it is today."

Larry McClanahan, a Navajo Indian who moved to Cottonwood from Arizona in 1972, said Foreman was one of the first people he met in the north state. He and his family were glad to receive clinic services.
"He took me as I was," McClanahan recalled. "He was a man that was concerned for people."
Rod Lindsay, a Shasta Lake city councilman who works with the Office of Indian Education for the Anderson Union High School District, also met Foreman through the clinic. Lindsay said Foreman was a mentor for many, sharing his knowledge of culture and history with the young.

Foreman also was instrumental in organizing the Redding Rancheria Indian Health Clinic on Churn Creek Road and served as director, later retiring as self-governance coordinator for the rancheria, Maslin said.

In 1985, when the rancheria regained its tribal status, Foreman was elected as its first chairman and subsequently served on the tribal council.
But in 2004, he and all his family members were disenrolled after a bitter dispute over his mother's maternal lineage. The struggle took a toll on his health, Maslin said.
Foreman suffered from heart and kidney problems, she said.
Leah Harper, a family friend of more than 20 years who does native medicine work in Redding, said she wanted to stand out in front of the Churn Creek clinic with a "thank you" banner in Foreman's honor
.
"I believe that Bob had the heart of the native people and he wanted to make a difference for them," she said. "Bob was loving and the children are loving and they work very hard."
In addition to Maslin, Foreman is survived by three daughters and three sons, as well as 15 grandchildren and 14 great-grandchildren. Funeral services are pending.
For her part, Maslin is grateful her father last year was able to do something he'd always wanted - to see the Grand Canyon.

"He actually got emotional just looking at it," she said. "He was in awe of its beauty and couldn't believe the world had such a beautiful place."
Congratulations to the Redding Rancheria for their despicable acts of DISHONOR in what they did to this man and his family.

Posted by OPechanga at 7:45 AM