THE BIA: Shameful Treatment of Native Americans And They Couldn't Care LESS. If You Die,If You're Disenrolled, SO WHAT? 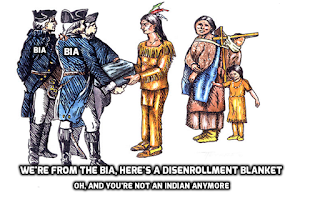 It's shameful how the BIA is either corrupt, complicit, or unnecessary.  If they aren't protecting Natives from the corruption of tribal councils and leaders, then they are part of the problem, as we've seen in the San Pasqual Matter, or more correctly, multiple San Pasqual matters, which may require recusal

The US BIA only violates Sovereignty when it is in their best interest. That’s why the BIA is known as the Bureau of Indian Annihilation. Once the BIA inserts the people its wants in power over the Tribal Nation, then when the People object and want their real leaders, the BIA says it cannot interfere because the dispute (which the BIA created in the first place) is an ‘internal’ problem which Tribal sovereignty prevents the BIA from interfering with.

Sovereignty is the catch all excuse for BIA inaction when they don't want to correct or prevent wrongdoing.


Yesterday, we wrote about the disenrollment at Grand Ronde.  We published this in 2012:

What make the BIA act in one case, but shuffle their feet and stick their heads in the sand in another?

The U.S. Bureau of Indian Affairs is quietly taking sides in a power struggle that has torn apart tribal government on the Fort Apache Reservation despite declaring neutrality in the dispute, records show.

Records obtained by The Arizona Republic suggest that the agency has undermined Tribal Court authority in an ongoing dispute between Chairman Ronnie Lupe and the Tribal Council and courts.
Lupe has defied a suspension vote by the council and an arrest warrant issued by the chief judge for the White Mountain Apache Tribe. Lupe and tribal attorneys contend that those orders violate the tribal constitution and are therefore moot.

Chief Judge Chief Judge Reagan Armstrong Sr. complained to a regional BIA director in March that the one of the top BIA agents in Arizona told police not to enforce the arrest warrant. The letter from Armstrong to Bryan Bowker complained to Bowker that Warren Youngman, BIA assistant special agent in charge for Arizona, instructed the police chief in Whiteriver not to arrest Lupe because federal authorities recognize him as the Apache leader.

Correspondence between Bowker and Lupe says the BIA offered to mediate the conflict. That proposal was accepted by five council members, who said the tribe is in crisis.
But it was rejected by the chairman as an invasion of tribal sovereignty. Lupe did later ask for a federal review of the Tribal Court led by Armstrong, and the bureau agreed to conduct that inquiry.

The BIA needs to be reformed or removed.  They must be held accountable for the harm to THOUSANDS of Native Americans that they are allowing to be stripped of their citizenship, with no pushback.   Sovereignty wasn't meant to be a club to beat the weak and helpless.

There is no fix. Everyone blames the BIA for getting involved in inter-tribal affairs and once they need help they say " BIA please help us". Is it right for dictatorships to determine membership? How do we resolve the issue of sovereignty without giving up our sovereignty? By placing another entity to oversee enrollment(tribal court) are we are just changing one bureau for another? The two main issues are that the BIA needs to have a systematic way of dealing with enrollment(an overhaul) and these tribal councils need to stop being assholes to their members.

BIA removed? Ha! What you smoking? Pechanga Indians will have zero chance of ever returning and every tribe will end up with 20 tribal members. Not a smart comment OP.

There is no need for the B.I.A. to even exist anymore.

Then what happens? Tribes can't even function within their own governments. How would they have deal with the US government. Tribes would definitely be out of business and assimilated except the ones with monetary influence.

What a blank statement anonymous. No solution. Thanks for the input.

In 1820's the US government was at war with the American Indian. The Bureau of Indian Affairs was formed on March 11, 1824, by Secretary of War John C. Calhoun designed to subjugate and assimilate American Indian.

What makes you think they are here to help us.

The United States need to terminate recognition of all tribes. Hopefully, that's what Trump will do...