8 Million Californians to Lose their Citizenship. State Revokes Their Right To Belong

8 MM Californians to Lose Their Citizenship After Immigration Determines They Can't prove they are Citizens. Or,
How it works at Pala, Pechanga, Chukchansi, Redding, EVIDENCE doesn't MATTER, you are out 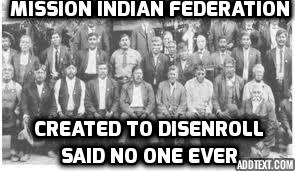 Today, you opened your mailbox and discovered a letter from the Immigration Service. You open it and find that the U.S. Immigration and Customs Enforcement has determined that your citizenship with the United States was given to you mistakenly and now they are going to terminate that citizenship.  ICE grants you one hearing to explain why you should not lose your citizenship.

You prepare your hearing materials to prove that this is some kind of mistake. You gather family tree records, birth certificates, and you even have an ancestor dug up to test for DNA which comes in at 99.7% match. Even though you are not allowed to see the “evidence against you, you know you have the burden of proof met, even archeology experts that the INS uses proves your ancestry.

The day of the hearing arrives and you march in to present your case, confident that having been born here in the United States is more than enough qualification for you to successfully prove your case. When it’s your turn to present your evidence, the Immigration Service lawyers simply say, "We don't accept that evidence." The judges in your case, whose relatives sent the letters of disenrollment as Americans side with the Immigration Services. You are now a non-citizen.

How can this happen?
You’ve met the burden of proof with the preponderance of the evidence and yet, you still lose your citizenship and all rights that come with it, voting rights, health care, educational assistance.

You appeal your case to the very people that terminated you and a month later, you receive a notice from the hearing that confirms the decision to remove your citizenship from you and it also instructs you to move from your current location to make room for "real citizens”

Those citizens may be adopted and not born in this country, but that’s okay, because the government has the right to determine its membership.

Welcome to Indian Country of California, where the tribes mentioned above have removed 25% of their tribes, which would equate to 8 million Californians.  Would you stand up for your fellow citizens, some of them your relatives to restore their citizenship?   If so, then why are you patronizing a business and casino of a tribe that does just this to their people?
Posted by OPechanga at 2:00 AM

Thanks to Bryan Galt for the inspiration. Wish he still wrote for his blog.

Well now, let me see if I have this right? You, and others in your membership, realize that your "Tribal Council" isn't in tune with what should be happening for the good of all. Could be, maybe, "Corruption, or Criminal acts," or not following their respective "Constitution and Bylaws." So you have all had enough. Now you execise your right, as a member of your respective Tribe, to gather signatures on a petition to show your discontent for the current "Tribal Council." So before you gather enough signatures to present to the General Membership, the "Tribal Council" decides to stop this action by "Banning" these seven(7) members, in good standing I might add, from "Tribal Lands" and forefit 4-10 years of percap. Where do they get the right to pull off this "Scam?" Sovereignty? "Not This Time!"...This brings to memory the recall of "Mark Macarro at Pechanga," and his similar "Threat to our membership.".....This Total Injustice" is "Inexcusable." They make it up as the go! Now if the "Government(Indian Affairs) doesn't step into this "Illegal Quagmire" they will all but prove that they are "Totally Worthless" as an agency for the good of "Native Americans" in their charge. These are "Blatant and Treasonous Acts" against their own, with no regard for the santity of their respective "Constitutions and Bylaws" that are suppose to protect them. Show me where it is written that these "Tribal Councils" can "Legally" do this? They think that they are "Above the Law!" Nowhere in "Tribal Law" is this "Condoned!" These are all "Corrupt and Criminal" actions against their own, without "Foundation!" Damn-it, B.I.A., do your job, and stop all this "Illegal Foolishness!" For the "Rights of Oppressed Native Americans" have been trampled on "Enough!" This falls in with the article above. This I wrote on the "Auburn Tribe Fiasco", but it is fitting here too.

Great analogy, but remember you have no citizenship therefore no rights so no court will hear your case. They are hoping you will go away and die. That is not the case, ask not what you can do for your tribe but what your tribe can do for you.

California would be a better place if could get rid of 8 million people, I'd vote to deport the illegals!

Editor: I want to tell you how much I appreciate your efforts in bringing publicity to the heinous crimes of human decency these corrupt tribal executive committees have committed upon their people. I don't know you, but I really would like one day to shake your hand and tell you how thankful I am to you for giving me hope in a time of great sorrow. People who have been banished or disenrolled from their tribes have no voice. You are a light in the darkness. Your website allows their side to be heard. I thank you for giving support to all peoples of the indian community who have been unjustly removed from their tribes.

The only illegals here are the ones who came from or whose ancestors came from other continents. Those voting members of the tribal gov't have adopted the tools of the Wasicu opressors who run this country. True apples. I don't care what their blood quantum is there isn't an NDN among them.

Corruption is totally driven by "Greed!" And the use of "Sovereignty" as a tool, or blanket, to allow these "Illegal Endeavors" to go unchecked, with no repercussions, or oversight for such "Criminal Actions." These "Tribal Leaders" side step and totally ignore their respective "Constitutions and Bylaws" for their own self interest, because they can! Whose to stop them? It's a known fact that the "Government(Indian Affairs) refuses to take action on "Human Rights Violations" against "Native Americans" in their charge. This is "Unexcuseable!" Justice and Fair has never been afforded oppressed Indians in Indian Country. As one(1) Tribal Leader stated: Oh, That Silly Little Constitution! Now that 2012 is approaching, we have got to turn up the heat against these Corrupt and Criminal "Tribal Leaders." Maybe another "Protest" is in order, but "Pressure" needs to be brought to bare. For these "Criminal's" think they are "Above the Law!" Close the "Casinos'"(for all I care) and bring back Tribal Laws of our ancesters, then watch the thieves melding into the woodwork. It would be a "Win Win" senario. Let us let 2012 be the "Casino Indians....Waterloo!" Our children need to learn the "Indian Ways" of our "Ancestors" before its to late, and our "Heritage and Birthright" is extinguished "Forever!" This is happening with every passing day, and we need to stop these "Corrupt Casino Indians"..."NOW".....

Flags in the air said...

Pechanga Casino is a MULTI-Billion Dollar Corporation who is hiding under the guise of soverigntyon many issues. If any one is negligent or naive enough to think that the Pechanga Corporation cares about all of the tribes members, they are blind. They have proved this time after time with their disgusting and artificial rulings on many issues. It is time to quit asking the Bureau of Indian Affairs to do their job, they are totally controlled by the Pechanga Corporation. You need direct grass-roots community action to confront what is going on, There is one thing to remember though, Uncle Sam has been unwilling to handle the Whole Comprehensive Indian Compensation Issue that not only deals with the Pechanga Tribe but many many other Native American Tribes that signed treaties with the U.S. government. I am saying the actual settlements to the tribes were not just or compensatory.If they had been Indian Gaming would have never been a first choice for Tribal Sustenance by many tribes, in fact I think it would have probably been a last choice when you look at all the problems connected to Gaming and that other word GAMBLING. It is precisely because of this abdication by the U.s. government that things have gotten so out of control.Sincerely,Flags in the air.

Nicely said. It does bring up some of the "Specifics" that are inherant to our cause in a way that we all can see the "Fruitility" in dealing with a "Government Entity" that doen't give a "Tinker's Damn" about the "Rights" of "Native Americans" in their charge.

Oh, poor Lost Tribe of Israel. Your children still have not learned anything from the Tower of Babel. How can we expect blessings when we build our lives on a false foundation?

There are no false "Foundations" here, Just "Corruption and Greed" on the part of these "Criminal Tribal Leaders!"

Anon on Dec.4,
OUR FOUNDATION IS ON SOLID EVIDENCE AND GROUND, it is Pechangas Tribal Corruptors who are on shaky grounds with their lies and the destruction they cause.
Every evil empire will eventually fall and Pechanga will fall hard, before you realize it, it will be over.
Have you seen the real world out there lately? YOU ARE PROBABLY A CLUELESS TRIBAL MEMBER WITH ALL THAT PER CAP. Enjoy it while you can Fool.

Not comparable. US citizenship can be granted to anyone at anytime so long as they are willing to complete the process. The idea being that US citizenship is attainable to anyone kn the world. This process is governed by the laws of the United States.

Tribes are distinct, individual, autonomous communites, governed by their own tribal laws, that are seperated from the the laws of the United States. Because tribes have that unique right to govern themselves, that right allows them to protect their resources and their wealth. Tribal citizenship therefore becomes tied to not only ancestry, but the tribes right to determine how their future will unfold for their community. The only way around this particular legal structure, is internal, the community has to decide how their governing documents regilare citizenshop. The analogy is not true, and is an incorrect way to think and understand tribal law and tribal soverignty, which is dangerous to every tribal nation in the United States.

Fuck these Tribal Leaders they need to be held accountable either by the law or by the Indian justice way.
The Government is so afraid of loosing the money that the Casino Tribes provide them so they have chosen "The hands off" approach.
So just shoot these assholes and move on.

Tribal citizenship can be GRANTED to anyone anytime also.

Tribes have laws, tribes have constitutions. Following their own laws is what much of this is about.

Tribal citizenship can be based on ancestry, or simple adoption into the tribe. An adopted tribal member has more rights than a descendant if they are disenrolled.

The "community" DID decide in our case at Pechanga, the tribal council did not follow the will of the people, and threatened others with termination when the raised questions.

Tribal SOVEREIGNTY was wielded like a club, to beat the weak....