Word from Facebook that Michael Rios is feeling poorly and will be undergoing surgery this week.  We hope and pray for a successful outcome.  Sadly the patriarch of the Petra Tosobol descendants Manuel Rios, Sr, passed away before getting JUSTICE.  How many of the MUNOA relatives must die, before they do the right thing at Pechanga.

Here is a repost, of an article written years ago, but it's a REMINDER, that it's not JUST about tribal disenrollment, but many Natives are caught in membership moratoriums.  Can anyone believe that the Pechanga Enrollment committee members are too stupid to process the paperwork they've had for DECADES?

It's well known in California that the Pechanga Band of Luiseno Mission Indians has terminated over 25% of their tribal members in two massive eliminations. Coincidentally, each family was removed just prior to tribal elections. (story reprised from earlier post) 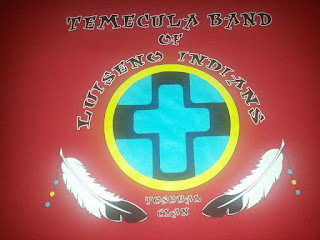 What many people still are unclear about, is Pechanga's so-called moratorium on membership.

This was put into place under the premise that the enrollment committee had to "catch-up" on all the membership claims. Of course, that was a ruse to simply keep rightful members from joining the Band as per the Tribal Constitution. Pechanga's Chairman Mark Macarro has claimed it's "not about the money". Pechanga's per capita payments were $10,000 per month when the first family, descendents of Pablo Apis were erased from the tribe. When the Hunter Family was disenrolled, (a term created to make it sound like Indians were kicked out of the PTA or country club) the per capita was $20,000 per month. Now, the tribe is giving $30,000 per month to those remaining. Raise your hand if you think it "wasn't about the money".

Here is the story of one family, that we've profiled before. We've been asking them to contribute to this blog with more information and they've finally opened up.

This is the Tosobol story, as told by Michael Rios:

First, let me start off by stating that our lineage has never been broken.

Then comes me I am the son of Manuel Rios his mother was Isabel Aguirre Rios my grandmother. She had two sons my dad and my uncle Mike Rios and his. family well that is as far back as I can go.


PLEASE LET US IN WE WILL NEVER GIVE UP, FROM A TRUE ORIGINAL TEMECULA PECHANGA INDIAN


HOPE THIS INFORMATION IS HELPFUL
Thank you

Now readers, you have before you what is an injustice. This family is related to the Munoa Family, John Munoa is the patriarch, who, none of us can recall EVER stood up before the membership and said, "MY FAMILY IS INCOMPLETE! I have family that MUST BE ENROLLED!"

We could be wrong and I will correct the record if the Munoa clan can provide the details. The Pechanga Constitution calls for OPEN enrollment every January. The tribal council led by Mark Macarro, said the tribe can rule on membership to keep people OUT via the moratorium, and yet, when the tribe voted to halt ALL DISENROLLMENTS, including the Hunter family, the council said the tribe could NOT rule on membership matters. Think it's a conspiracy now? The tribe can vote to keep people OUT, but not to keep people IN?
What do you THINK? Please add your voice to the comments, please share on Facebook
Posted by OPechanga at 2:00 PM

Not only did John Munoa never speak out about the moratorium he was heard saying that non tribal members cannot inherit allotment land at a recent probate hearing at the BIA Riverside office.

Clearly he doesn't want to share with anyone, even his own blood, what is rightfully theirs.

John Munoa is not an honorable man.

Didn't he physically accost Ed Burbee? Well, I guess there's some support for that.

I remember that incident at a general membership meeting when Mr. Potato Head as usual was hogging the members' comments microphone and Munoa and the grand potato got into a shoving match and had to be seperated.

The grand potato actually had a law passed in his honor that limited tribal members' comments to five minutes per turn at the microphone.

Why weren't these Tosabols enrolled in 1979? So many of them are definitely old enough.

I know this family and they are good people. The tribe is wrong in their dealings with this and our two families who have been disenrolled. Regardless of when their applications were presented to the tribe they have as much right as those families who are still in the tribe. The fact that the family as an allotment is proof enough that they were their at the time the government recognized the Temecula Indians. We know who we are as do the Tosobols. The tribe is not fooling anyone, they do not want to share and by not following the tradition of the tribe they dishonor our ancestors and they destroy their spirit all for what? Money money will not follow you into the next life.

Many more Tosobol are now born into the bloodlines.we will update soon we als would like Manuel ops Rios sons Michael and Manuel Jr Rios to join tribal government to bring back traditions of Temecula band of lusieno Indians the true name in federal records we have been kept out for political reasons according to a relatives proof out of Mark maccaros dictatorship council.the next election will remove non Indian Maccaro and non Indians that have Benn posing as lusieno Tosobol will do right by all brothers and sisters of lusieno blood no more sinnoval Indians peace in tribe will happen if tribe stands up for our ancestors and vote for right justice honesty birtright

Why did this family not enroll in the 80's or 90's?? Did they not care to enroll in the tribe before there was a reason i.e.:percap? Just curious there could be good reason. I was enrolled in my tribe when I was a child by my parents way before there were casinos because they wanted me to be a part of the tribe even when there was no perks.