The Foreman Family: Maintaining a Fighting Stance Against Tribal Corruption

It's not only the big home runs that can make a difference in the struggle for our rights. In working to gain our rights back, small hits need to be made to emphasize the wrongs perpetrated on Indian people by there own tribes.

The family of Robert Foreman, Native American Hero, are fighting the old fashioned way: With in-your-face advertising. They are using Robert Foreman's home,which faces the Redding Rancheria Casino to display their message. (click to enlarge) 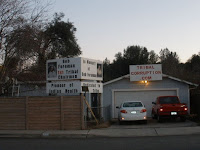 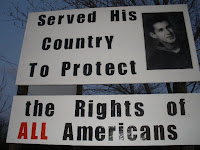 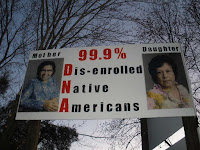 This man was the FIRST Tribal Chairman of the tribe, he brought HEALTH CARE to Native Americans in the region, and for THREE THOUSAND DOLLARS MORE in their per capita checks, the tribe disenrolled Mr. Foreman and his family. The first per capita check was $3,000 and after the Foreman family was disenrolled it doubled to $6,000. After all the negative press, shining light on the despicable actions of the Redding Rancheria council, per capita has dropped to $2,500 per month.

NOW, imagine if the Foreman family was fighting FOR the tribe! I'd want them in my corner.
Posted by OPechanga at 11:22 AM

Give it to the Foreman's to keep disenrollment in the limelight in creative ways and especially since it is on the rancheria property. Others fight behind the scenes and keep the information circulating and other contribute, demonstrate, write editorials, etc... No matter how its done, getting the word out and coming together to make the stand will eventually stop this nonsense of disenrollment, moratoriums and genocide of entire families. Remember the old saying "The bigger they are the harder they fall". When the tribal councils begin to realize that it is actually the people that make the tribe, then perhaps we can get back to being a community. Until then continue to fight however you do it to get Civil Rights and Individual Liberties for all our brothers and sisters who are the individual American Indians.

Getting into the fight is the most important effort we can make. Letters, signs, car decals all are 'silent salesmen' for the issue of civil rights for the individual Indian.

Tribes can do so much better by inclusion rather than exclusion.

The redding rancheria is ran by barbara murphy and tracy edwards alone... time will tell how soon we will see these two vampires go at one another after kicking out the foremans...

the entire redding rancheria's membership is a majority of pit river people that are NOT EVEN FROM THE SACRAMENTO VALLEY where the rez was established by interior agents in 1922 for homeless indians.

win-river is in wintu country, and the wintu people reamin without a tribal government, a community, or federal recognition, while this fake federal tribe ruins the image of all american indians while bringing about the eventual loss of tribal sovereignty that is fouthcoming in relation to legal relief for the disenrolled.