Disenrollment Leads to Desperation, Violence and Murder in Indian Country

Ray has a new book out on the 2014 disenrollment murders by Cherie Rhodes of the Cedarville Rancheria in Alturas.   Our friends at Indianz .com have some details and the book is available on Amazon 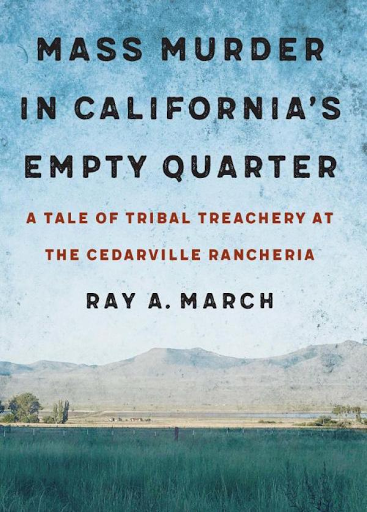 In his article Tribal Disenrollment and Political Violence: Kenneth Hansen PhD was a Witness for the Defense of The Cedarville Rancheria Murderer details how the disgraceful actions of disenrollment led to the killings.

The term used at Ms. Rhodes’ murder trial was banishment. However, to me banishment denotes a temporary condition, even if someone is banished for a lengthy period of time. Ms. Rhodes and her son were by definition disenrolled, as they lost all privileges of tribal citizenship, including personal and real property rights, political rights, association, as well as due process, permanently. For all intents and purposes they were terminated and dismembered from the tribe and the tribal community. This followed on the heels of a recall effort mounted against Ms. Rhodes and her son, who had served as tribal chair and vice chair, respectively, amid embezzlement allegations put forth by her brother, Rurik Davis. Davis would be her first victim, and was killed instantly by a bullet between the eyes...

Cherie Rhodes was found GUILTY on all counts in December 2016.

Violence is NOT the way, but then in most cases of disenrollment of 11,000 Native Americans, maybe it's a language that corrupt tribes would understand.

Again, Dr. Hansen wrote in 2013 on the violence at Chukchansi, in Coarsegold near Fresno.

Indian gaming was intended to provide self-determination and economic development to Indian Country. Instead, it caused certain people to “go wasichu,” that is, to become like the colonizers we despise from history. Whereas the US government once terminated their trust relationships, that function has now been devolved to the tribal governments themselves, who then disenroll their citizens. Ultimately disenrollment could lead to the same effect as was intended by termination—the assimilation and extinction of Indigenous people.In tribal governments there are inequities in terms of rights—access to jobs, the ability to participate in community affairs, the right to vote, and equal protection under the law. These are known collectively as civil rights. Everyone has them. The distinction between civil liberties, i.e., speech rights, and the like, is that civil rights must be provided and protected by government. Tribal governments that disenroll their member-citizens have been negligent in protecting the civil rights of their people. The Indian Civil Rights Act of 1968 was passed by the Congress to protect people from their tribal governments, but it has not been enforced by the federal courts (the Cahto ruling being an exception), nor by the BIA.

Pepper spray, tear gas, thuggery, all happened at Chukchansi. Others have followed suite.  Yet, today, there is still no policy of protection for those harmed by tribal disenrollment.  If one has no laws to protect they, their families and their ancestors, HOW CAN WE be surprised when some take the law into their own hands.  Desperate times lead to desperate actions
Posted by OPechanga at 8:55 PM