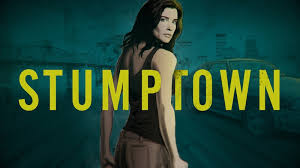 Needless to say, it was more a drive by in this show about a private investigators with ties to the local native american tribe.

The episode had to do with attacks on the tribal chairwoman (played by Tantoo Cardinal of Cree and Metis descent)  and the investigator Dex's ties to her son.  A young tribal member was disenrolled and banished for drug sales.  The tribal leader used sovereignty rights to protect him as he was the nephew of her right hand man.  She simply would have him re-enrolled, realizing mistakes were made.

Disenrollment has been the subject in other shows including LONGMIRE and HOUSE of CARDS   yet none seem to want to delve deeply into the issues, which includes greed, power and abuse

For more on tribal disenrollment, I have over 50 links here
Posted by OPechanga at 5:37 PM

How about it ABC why don't you make a film about the truth behind disenrollments and corruption in Indian country today.
I know of about 10 to 15 thousand people who would play in the film so the only cost for the film would be putting the truth out there for everyone to see.
It would be a great movie with real victims
and the only actors would be the corrupt leaders that put on their acting skill when dealing with the public.
Tell the truth for once and get the respect of all Native American people that have been hurt and continue to be hurt on a daily basis.

There was recently a play at the Native voices at the Autry, native writer, director, native cast, about disenrolling tribe Pechanga.
And non other than good ole Mark Macarro was in the audience...awkward