An early 2004 story on disenrollments at Pechanga and Redding Rancherias in the Chicago Tribune, with AIM's Laura Wass commenting on the abuses 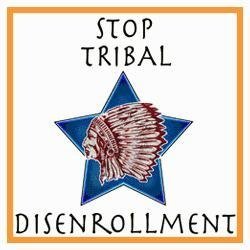 John Gomez Jr. is the great-great-great-great grandson of tribal forebear Pablo Apish, whose 1842 land grant from Mexico is now the site of a casino and hotel operated by the Pechanga Band of Luiseno Mission Indians in Southern California.
But last March, Gomez and 133 adult relatives were banished by the tribe after a rival faction persuaded tribal leaders to conclude that Apish's granddaughter didn't live on the reservation at the turn of the previous century.

Her alleged quitting of tribal land--which Gomez and his relatives dispute--eliminated her as an original tribal member. That meant her 134 adult descendants today plus dozens of children, the largest family in the group, suddenly were cut from the tribal tree.
It also meant that Gomez and his 133 family members were out of casino profits that amounted to $15,000 a month to each of the 900 adults in the tribe, as well as health care, life insurance and other benefits.

"It was greed," said Gomez, 36, a paralegal in Temecula who was a legislative analyst for the Pechanga Band from 2001 to 2003. "If you get rid of 130 people, your portion of the gaming proceeds gets larger."
With the rapid expansion of Indian casinos, stories like Gomez's are becoming more common: California tribes are increasingly disenrolling long-standing members, pitting families against families as they divide up lucrative gaming profits.

Lawyers for both sides say the California cases could have widespread impact for the 2.5 million American Indians and their hundreds of tribes nationwide, especially those with membership disputes involving profits from land deals, smoke shops and the like.
The ejected members say their ousters are arbitrary and unjust--even when, in one instance, DNA evidence appears more than 99 percent conclusive in establishing bloodlines.

Posted by OPechanga at 5:35 PM