Gaming writer Buck Wargo has an incomplete piece in CDC Gaming Reports on how Native Americans  are reacting to negative comments, sovereignty, and acknowledgement. He's not there to make a complete story, but report on gaming. I'll clap back in blue..

There’s frustration among Native Americans that people aren’t listening to them, not taking their sovereignty seriously or recognizing that they exist.  Tribal leaders said they want politicians and the public to condemn what they consider a slur to Native Americans as if someone makes a comment deemed anti-Semitic or other negative racial or religious connotations.
We've written about the Pocahontas issue and the Redskins issue numerous times.  This is the FIRST time we've heard Macarro mention it. 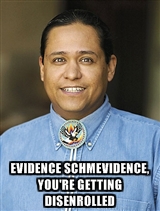 Mark Macarro, tribal chairman of the Pechanga Band of Luiseno Mission Indians in Southern California, once the subject of a RECALL ATTEMPT  said there was pushback from politicians and others when Congresswoman Iihan Omar, D-Minnesota, made controversial comments about Israel and Jews.  They weren't controversial, they were racist, anti semitic and hateful.
“A lot of people came down on her and there was pushback because she denigrated Jewish people and politicians,” Macarro said. “Donald Trump talks about Pocahontas, and people laugh and snicker, and nobody says anything. Our Indian Country community (did) but is anybody listening?”  We feel the same about YOU, Mark and your cohorts who stripped us of our heritage, denigrated our ancestors, ruined our children's futures, threaten us with banishment.  And nobody says anything.
Macarro expressed frustration about a 2018 survey that said 40 percent of people didn’t think Native Americans still exist.  This from a man who disenrolled 25% of his tribe out of existence, pals with other who did the same like Pala's Robert Smith, and who skirted poltical donation rules we saw in Wikileaks.
“We are invisible largely to American society, and that’s a problem,” Macarro said. “When we try to articulate argument of government parity and tribal sovereignty (SOVEREIGNTY DOESN'T mean RIGHT) who is listening other than a very small segment of Congress. You SHRINK your tribes and then cry about being invisible.  What is you disenrollers had 11,000 MORE to rally to the cause? And, politician only listen to your casino money.  The GOOD ones, listened to us, Mark, and kept you from your water bill even after you paid your lobbyist wife HUNDREDS OF THOUSANDS of Dollars.  We stayed at a Holiday Inn Express.

Macarro: We have a lot of work to do to turn that around. We talk to ourselves in our own echo chamber and listen to ourselves but outside of these walls nobody is hearing us. That’s a problem we need to make sure they do because our future is ahead of us.”  Our future is ahead too, imagine the great publicity should disenrolling tribes bring their people home like Enterprise Rancheria and Robinson Rancheria did.   BRING the Pechanga disenrolled HOME Mark.  Let those caught up in a DECADES long Moratorium INTO the Tribe where they BELONG, just like their relatives.  Show REAL leadership, real concern for your OWN family, your own TRIBE......

Posted by OPechanga at 2:29 PM

Yep, Mark is starting to look Asian in his photo's.

It is hard to enforce credibility.